Good vibes at Oso Flaco: Birds and families galore at this Guadalupe oasis on a sunny Sunday

The landscape glows on this balmy Sunday evening as I drive through Oceano, Nipomo, and then the farmland that straddles Highway 1 into Guadalupe. Car windows down and in no rush, I notice that everything—from the ocean, to the mounds of sand dunes, to the towering eucalyptus trees, to the rows and rows of green agriculture—take on a lovely warm hue as the sun continues to descend on the western horizon. A right turn onto Oso Flaco Road from Highway 1 South leads me another 4 miles to a dead end, at one of the most alive natural oases on the Central Coast, Oso Flaco Lake. 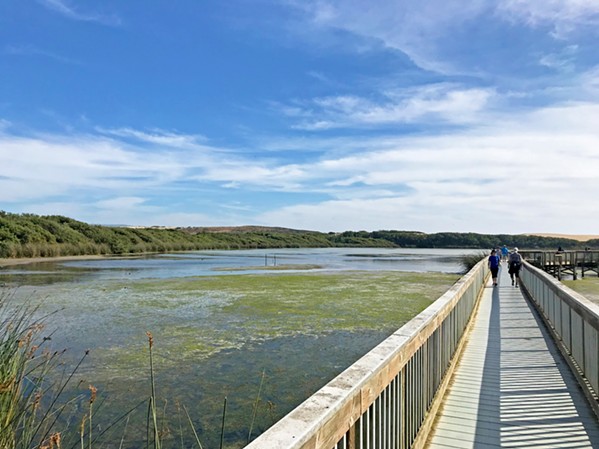 This excursion is a great way to wrap up a weekend, June 8 and 9, that can only be described as the unofficial start to summer. Temperatures from the coast to North County hit 80 degrees or higher. A romantic, carefree mood hangs in the air that's quintessentially summer. Throughout the weekend, SLO County beaches were understandably packed; on Saturday, my friends and I could barely find space for our lounge chairs at Shell Beach. 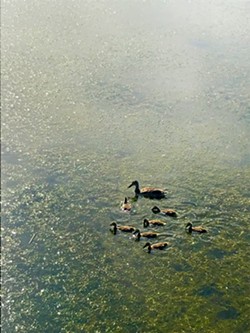 But no matter how gorgeous the weather is, Oso Flaco Lake always remains chill, it seems. It's far enough away to deter most people in SLO County. Maybe it's still unknown to some. Located at the southern end of the Oceano Dunes State Vehicle Recreation Area, the lake and adjacent dunes are home to myriad bird species and protected habitats. While bears are apparently part of the habitat, I don't see any signs of one.

The lake's name, translated to "skinny bear," originates from Spanish legend. When Gaspar de Portola's expedition passed through in 1769, the team shot and ate a skinny bear—shortly after, many of the men died. The explanation is that the native Chumash people had fed the bears "tainted meat" to weaken the species, which then killed those who consumed it. Weird stuff. Maybe the Spanish had it coming? 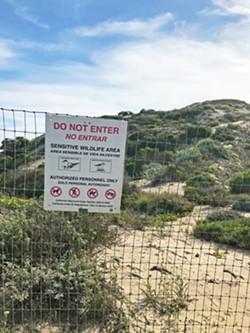 Anyway, after a short initial walk through a densely wooded area, I emerge onto a footbridge, which cuts across the modest-sized lake. Suddenly, I'm engulfed in bird sounds. From ducks to song sparrows, it's a symphony of birds. I also observe a lot of families (of humans). Everybody seems to be in a good mood. The wind is calm. Some people walk briskly across the bridge. Others (including myself) hang over the ledge to watch and take photos of the birds. Others have their fishing lines thrown over the side.

Once across the lake, the path becomes a boardwalk that meanders over the dunes. Both sides of the walkway are fenced off to protect bird nesting habitats. It eventually spills onto the beach, where to the north is the playground for high-adrenaline off-road dune riding and to the south is the serene, hardly touched preserve of the Guadalupe-Nipomo Dunes National Wildlife Refuge. While sunset inches closer, it's a beautiful scene on the beach, as several families enjoy the surf, sand, and each other. I sit quietly on the edge listening to music.

To me, Oso Flaco Lake represents that perfect middle ground of uses on the expansive Nipomo dunes mesa. It's so well preserved, yet accessible to humans. People can both enjoy it and respect it. There's neither a profit motive here nor some kind of environmental crusade. I wish we treated more of our natural resources this way. 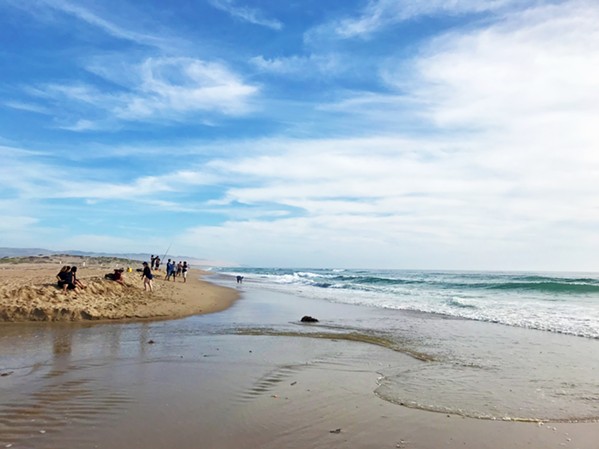 Recently, California State Parks introduced a proposal to develop the area with campgrounds and a new staging area for the off-road park. It's hard to imagine that happening without fundamentally changing what Oso Flaco is and means to the Central Coast community and wildlife. I'm sure there's the right balance to strike—and I hope they can find it. Δ

Assistant Editor Peter Johnson is ready for summer. Reach him at pjohnson@newtimesslo.com.