Wine Country Theatre's production of The Last Flapper is on stage through June17 at the Park Ballroom in downtown Paso Robles. Tickets are $15 for students, $20 for group seating, and $25 for general admission. Visit winecountrytheatre.com for more information.

Sometimes fact is even stranger than fiction. Such is the case when you peek behind the curtain into the lives of Zelda and novelist F. Scott Fitzgerald in the one-woman play, The Last Flapper. 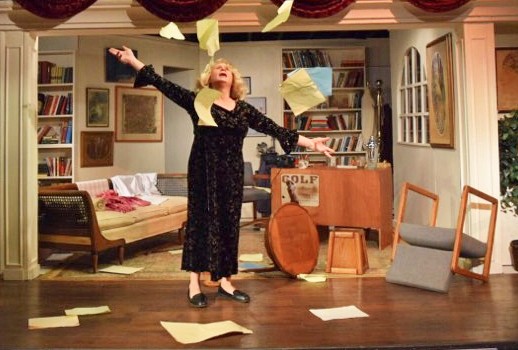 The show is penned by playwright William Luce (Lucifer's Child, Barrymore) and is currently on stage at the Park Ballroom courtesy of Wine Country Theatre. Luce imagines the last days of Zelda's life while she languished away in an insane asylum in Asheville, North Carolina. Directed by Jacob Shearer (a founding member of the theater company), Beth Marshall (Guys and Dolls) takes on the role of Zelda with a level of energy, detail, and emotion that makes for a fascinating theatrical experience. Marshall previously took on the role of Zelda in The Last Flapper in 2017 at the Pewter Plough Playhouse in Cambria, and it shows in her performance.

Based on Zelda's letters and stories, this intriguing play is thought to be the definitive portrait of Mrs. F.Scott Fitzgerald: the glamorous, fun-loving, and ultimately tragic Zelda. In The Last Flapper Luce reveals the contradictions and mysteries of the extraordinary woman behind her famous husband who penned The Great Gatsby while telling an emotional and witty story.

Set in an insane asylum on the last day of Zelda's life, the play unfolds as a hypnotherapy session. Zelda tells of her life as a Southern belle, of her chaotic marriage, and of her mental breakdown. The entire play takes place within the set of her therapist's office, which Zelda systematically destroys as she rants and raves about falling in love with "Scott," feeling overwhelmed by their party-consumed life together, her own writing and art. She also makes pointed emotional references about her contempt for writer Ernest Hemingway, a close friend of her husband's, and one tearful admission about not being a good mother to her only child, Frances.

Marshall's two-act monologue is interrupted periodically with occasional announcements being made on the intercom about patients who have visitors waiting to see them, therapeutic art classes, and doctors canceling appointments.

In Zelda we see a person grappling with the Southern girl who fell in love with the dashing young Yankee writer and the woman whose husband called her a "third-rate writer" and "plagiaristic," after she penned her only novel, Save me the Waltz, which drew heavily on the lives of the Fitzgeralds. Ironically, Zelda's more famous husband is rumored to have used excerpts from her letters and writing in his books. Through Zelda's own admittedly biased lens, we see a picture of F. Scott Fitzgerald, living the life of his character Gatsby in a sort of alternate universe. He's gotten the fame, wild parties, and even the golden girl Daisy, but still is just as miserable as his fictional protagonist. Δ