A valiant reporter hangs up his press pass

Colin Rigley, our news editor and part-time sous chef, is no longer either of those things. The man resigned last week, with class of course. Rigley wouldn’t bounce without a two week’s notice. In fact, he threw an extra couple of weeks our way, like a gentleman, which gave us plenty of time to plan not one, but two-and-a-half going away parties for him!

And what do I get? A bunch of his work to do. Swell.

Anyway, we drank beer and ate fried food at Firestone, drank beer and ate noodles at Mee Heng Low, and drank a little more at Sidecar and McCarthy’s. While there was no food-eating at the last two stops, there was lots of open access for the public. (Therefore, by the transitive property of journalism, this article covers a very public event that absolutely anybody was able to attend, and it’s justifiable because it showcases a lot of nice venues in which the readers can someday throw their own going away parties. See how this totally works as an Art Bash? It does. Trust me.)

Plus, the whole thing was a celebration of one of the best damn writers the Central Coast has ever seen, probably. He’s been the tops since I’ve been around at least. But now he’s gone, and I’ll be damned if I sit back and let the world forget about his contributions to the world, both civic and dimple-related. 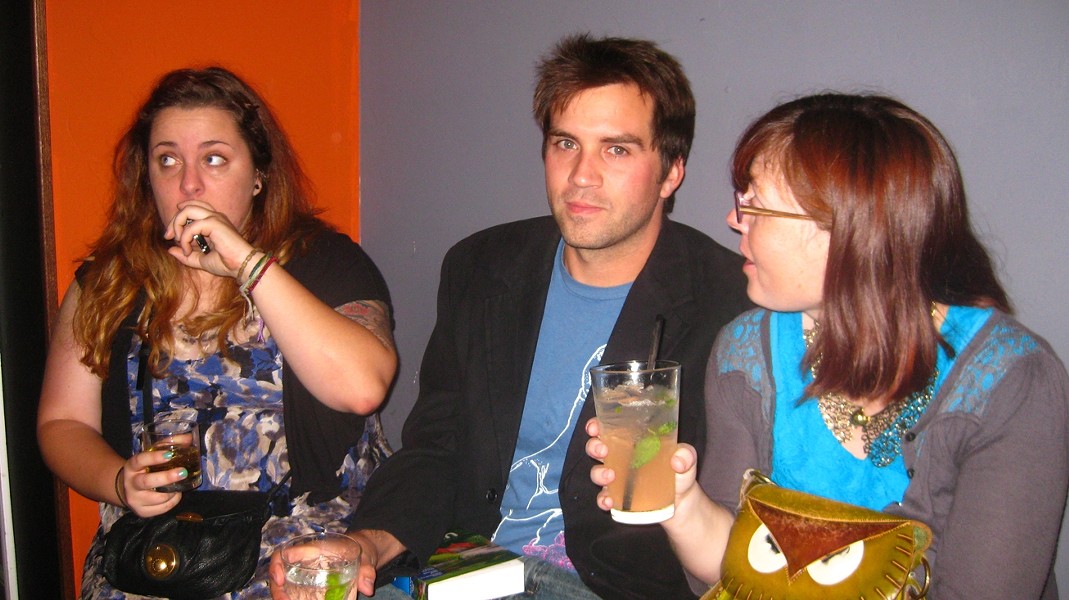 Before telling the news business to bite his shiny metal ass, Rigley cranked out investigative pieces like some kind of handsome journalism robot. Remember that time he stayed the night at Sunny Acres in order to give a first-hand account of conditions there? Who can forget the article that revealed Morro Bay’s beloved aquarium to be little more than a pit of seal despair? Or the time he exposed Paso Robles police officer Jeffery Bromby’s use of excessive force when he held that poor woman to scalding hot pavement and burned the hell out of her arms?

I remember, because Rigley didn’t just report the incident, he dove deeper, examining how protected cops are from public scrutiny and how difficult it is to fight them in court. Typical Rigley.

Admittedly, there’s a part of me that’s happy to see him go. He gets to leave the stress of news behind and get paid about double for doing it, and I get to snatch up his hours and his Rolodex full of contact numbers. It’s win-win, aside from the Colin-shaped hole in my heart, a hole no amount of booze can fill.

There will be no more cartoon action figures set in window sills above his desk, no more clever T-shirts bouncing buoyantly down the halls of power, and no more random outbursts of profanity ringing through the office. He’ll be missed, but hopefully his grumpy sarcasm, thorough reporting, and utter dedication to the downtrodden will live on through the next generation of New Times reporters, like the part in Lion King when Simba sees his dad’s reflection in the water.