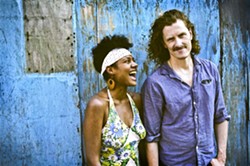 Have you ever noticed how some voices seem to go together, complement one another, and weave around each other like children playing a game in a field of wildflowers? That's what I hear when Allison Russell and J.T. Nero—the two core members of Birds of Chicago—sing together. Separately, his voice is a countrified singing-out-of-the-corner-of-his-mouth croon and hers a sweet, soulful, gospel bell, but together their voices dance!

This Saturday, July 26, SLOfolks presents Birds of Chicago in concert at Castoro Cellars at 7 p.m. ($22 at Boo Boo Records or the venue: 238-0725 and castorocellars.com/Events). For an added charge, Dining with André starts at 6 p.m.

With shades of Van Morrison and Paul Simon, the duo traverses everything from doo-wop to soul to Americana, all performed on stringed instruments (guitar, banjo, ukulele, stand-up bass) and occasionally clarinet, accordion, and cajón.

The way they sing it, it becomes about the tenderest thing you’ve ever heard, and I interpret it as a lament from a couple that doesn’t want to fight a war of words anymore. Song after narrative song, they paint sonic images that stick with you. It’s amazing stuff. 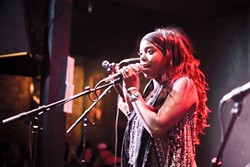 If you’re on the fence about this show, get on YouTube and check out their videos or tune into KCBX’s Broken Spoke Folk Show at 90.1FM when Janelle Younger will be interviewing Birds of Chicago after 2 p.m. the same day as their Castoro concert.

Speaking of a band that will give you all the feels, The Monroe returns to headline SLO Brew this Friday, July 25 (7:30 p.m.; all ages; $7 presale or $10 at the door). This band of young performers keeps getting better and better. I saw them last at the Live Oak Music Festival, and I’m always surprised by their eclectic range: soul, folk, rock, pop, gospel, reggae and ska, and R&B.

At the heart of the band is Morgan Monroe, who has got a set of pipes that rival the likes of Lauryn Hill. The musical mastermind is reportedly Isapony XD, the band’s keyboardist and horn player. Guitarist Renny Currin is also integral to the band’s sound, but none of it would be possible without the airtight rhythm section of drummer Taylor Nicole Belmore and bassist Ryan Paterson.

Last year, the band won Best R&B Song and Best Live Performance at the New Times Music Awards. I can’t say enough about how talented these folks are. Another great local act, Sparrows Gate, will open the show.

If you’re looking for something a bit more raucous, head to SLO Brew on Sunday, July 27, when Heart to Heart headlines a four-band show (7 p.m.; all ages; $12 presale or $14 at the door) with From the Top, Second to Last, and The Mighty Fine.

The California Mid State Fair is still going strong, and the Grandstand entertainment continues this Thursday, July 24, with Train and opening act The Wallflowers ($36 to $56; midstatefair.com; 7:30 p.m.). Train’s biggest hit is 2010’s No. 1 smash hit “Hey Soul Sister,” which I know by heart because my 12-year-old just kills it on ukulele. Most recently, they released California 37, which has four pretty solid singles including “Bruises,” “Mermaid,” “50 Ways to Say Goodbye,” and “Drive By.” The double-Grammy-winning Wallflowers are fronted by Jakob Dylan (Bob’s kid). Free on the Fort Frontier Stage is Blood Sweat & Tears with Bo Bice (6:30 and 8:30 p.m.). Mission Square has Moonshiner Collective (6:30 and 8:30 p.m.)

Concerts in the Plaza is still packing them in every Friday this summer in the SLO Mission Plaza, and this week one of my favorite local bands is scheduled to perform from 5:30 to 7:30 p.m. I’m talking about Fialta, whose infectious, original pop tunes are freaking earworms! Just thinking about the band has caused their song “Summer Winter” to start playing in an endless loop in my brain! Damn you, Fialta! See them this Friday, July 25. 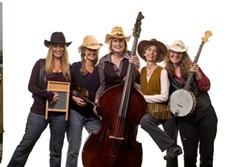 Amazeballs guitarist Ed Gerhard returns to the area to play Coalesce Bookstore this Friday, July 25 (7 p.m.; $22; 772-2880). The Grammy Award-winning performer works sheer magic on the six and 12-string guitars, slide guitar, and acoustic Hawaiian lap slide. Scott Alarik of the Boston Globe had it right when he wrote, “Gerhard does not write instrumentals. He writes songs only a guitar can sing.” He’s also surprisingly funny in between songs.

Broadway veteran Gale McNeeley, Lara Ruth, and Ruth Faas have teamed up to present Sing Out, a tribute to legendary folk singer Pete Seeger this Saturday, July 26, at the Steynberg Gallery (7:30 p.m.; all ages; $10). Seeger’s known for songs like “Where Have All the Flowers Gone?,” “If I Had A Hammer,” and “Turn! Turn! Turn!” He also popularized songs like “Irene, Goodnight,” “We Shall Overcome,” “Guantanamera,” and “This Land is Your Land.”

“We want folks to come and help us sing the songs of Pete Seeger. We even have a dozen ukuleles for folks to play. If you loved Pete and his music, come and celebrate them both,” group leader McNeeley said.

Los Angeles-based Soul Scratch, a Broken Complex Records recording artist, will bring their self-described “California soul” to the Frog and Peach Saturday, July 26. I listened to their track “Working Man” and couldn’t help but think about the great 1991 film The Commitments, which is about a bunch of Irish working-class mates who tap into the soul of American R&B music. Soul Scratch definitely has soul!

The Arroyo Grande Village Summer Concert Series continues this Sunday, July 27, when bluegrass act The Honeysuckle Possums play at 1 p.m. at the Rotary Bandstand in the Village. The Bluegrass Music Society of the Central Coast is the featured nonprofit, which is fitting! The Honeysuckle Possums is a high-energy, all-woman band, playing bluegrass, originals, and old-timey mountain music. Should be a hoot! 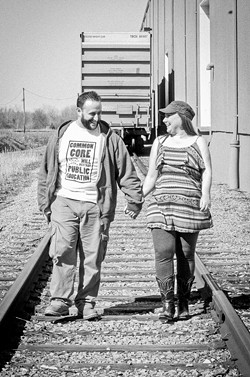 Could this be the feel-good story of the year? A musical duo is traveling from New York to San Diego this July to perform their tour Brainwashing The Ride. Featuring Katie Ann and MC Zill, an engaged couple, set to marry in 2016, are living their dream and promoting their albums this summer on their nationwide tour. I guess they’re also testing their compatibility! Katie Ann has a new album called The Ride and MC Zill has an album called Brainwashing, hence the name of the tour. You can see them on Tuesday, July 29, at Linnaea’s Café (7 p.m.; all ages; free). As sort of an endearing preamble, Katie Ann, originally from San Diego, went to New York to pursue her music career, and she met MC Zill when she hit his car. So. Damn. Cute.

Gypsy jazz act Red Skunk plays Blacklake Golf Resort’s outdoor music series this Wednesday, July 30. These shows are a ton of fun. Just bring a low-back chair or blanket, and find a spot. A full bar, as well as beer and wine, are available, as is Santa Maria-style barbecue. Fronted by blazing redhead firebrand Mollie Reeves, Red Skunk will blow you away with its retro, Django Reinhardt-style sounds. You’ll feel like you’re in a Parisian café or something!