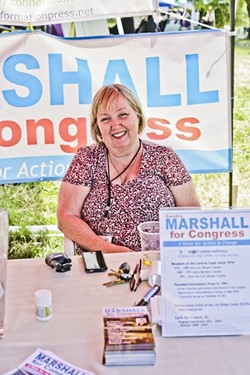 Apparently Mother Nature appreciates some appreciation, because she has provided some sweet weather for Earth Day! It’s Sunday, April 27, and the sun is shining and a light breeze is blowing at El Chorro Regional Park when my wife and I disembark the shuttle. I see a lot of girls with flowers in their hair, and Burning James and the Funky Flames are playing when we see our friend Babak Naficy, an environmental lawyer whose kids have run off just as he was planning on leaving.

“We’ve been here for three hours,” he says before lamenting the so-so turn out. “Live music on a Friday in the Mission and the place is packed, but here you’ve got beautiful weather, free live music, and beer, and look.”

Looking around, there’s maybe 150 people. Of course, they come and go throughout the day, so for all I know, thousands might pass through. And anyway, the people who are here seem to be enjoying themselves.

Anna and I start checking out the booths and run into activist and Information Press publisher Sandra Marshall, who’s campaigning for the Congressional seat currently held by Lois Capps.

“I’m trying to get the word out, but it’s hard because I’m running a totally grassroots campaign,” Sandra says. “I wasn’t planning this, but it’s time. We should be able to put some good legislation through Congress.”

Just next door I see the most marvelous invention, a Tower Garden manufactured by Juice Plus+. It’d be a great solution for someone with limited yard space, problems with rodents, or someone with no yard but maybe a sunny balcony or patio area. It recycles water using a pump and cistern, so it uses very little water and energy.

“I have gophers,” says distributor Laura Austin, who’s here with Mike Stewart explaining the benefits of the system, which isn’t exactly cheap, but could over the years pay for itself. It’s $525, but you can pay $45 a month interest-free for the first year. Call Laura at 772-1478 (or email her at ljaustin55@yahoo.com) and she’ll tell you all about it.

After raving about the accuracy of our syndicated astrologist Rob Brezsny, Laura gives my wife and I a “heart-to-heart” hug before we move on.

We see SLO icon Don Wallis by his hand-carved puppet theater, and he asks if I have time to devote to my own creative endeavors. Sadly, between my two jobs and my family, I don’t, but he assures me I will in the future. I hope to slip as creatively into my retirement as Don has. You rule, Don!

Big photos of Supreme Court Justices Alito and Stevens loom over the booth for the Citizens Congress, whose goal is to remove the influence of money from politics. After the euphemistically titled Citizens United decision that ruled that corporations are people and money is speech, the group first worked to get a Constitutional Amendment reversing the decision, but that didn’t go anywhere, so now they’re holding a Citizens Congress in Pismo Beach at the Cliffs Resort from June 2 to 5. A lot of power players from D.C. are expected to attend.

According to the group’s literature, “Congresspersons spend three of every five weekdays raising money for reelection” and that “polls indicate that 90 percent of Americans favor removing the corrosive influence of money in politics.” Visit their website at citizenscongress2014.org for more info. Recent studies argue that the U.S. is more an oligarchy than a true democracy, so this is an issue we should all be worried about if we want our votes to count.

There’s a lot to see out here. I watch a solar cooking demo, hang out by a kids’ drum area watching them wail away, check out some heavenly bodies through the telescopes, and watch the dancers shaking their groove thangs to Burning James. The sun is shining and life seems pretty good knowing folks like Sandra Marshall and the Citizens Congress are on the case! Go progressives! You’re the future! And thanks, Earth Day Alliance!