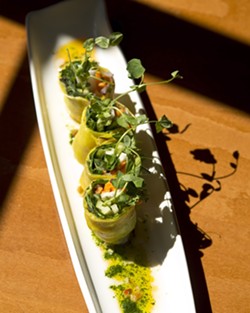 A friend recently shared his uncomfortable experience while taking his family out to a chain restaurant that serves gluten free (GF) pasta because his five-year-old daughter shows signs of being gluten intolerant. She had ordered noodles, but while the family’s meal was being prepared the server returned to inform them that the pasta was GF but the cheese was not. The father explained that changing her order would have thrown off the timing of the meal. And his young daughter would have found it difficult to sit and wait while the family ate so they acquiesced and allowed her to eat the mac and cheese. Fortunately she didn’t have any problems, but in my tally for accountability that’s not acceptable at any restaurant.

Allergies plague many Americans, children and adults, regardless of age. Celiac disease, one of the most prevalent allergies in recent years, affects 1 out of 133 Americans (almost one percent of the population) according to CeliacCentral.org. Sadly, they estimate the 83 percent of Americans who have it don’t know they have it. Because it’s so difficult to detect, six to 10 years is the average time it takes to be diagnosed. That’s why it’s difficult for someone who has just discovered they’re allergic, or intolerant to gluten in wheat, rye, or barley, to dine out. They’re often unsure what is safe to eat.

That’s especially true when you factor in dishonest advertising. No restaurant should claim that they serve GF pasta if the added sauce or cheese has gluten.

I decided to call on several local restaurateurs to ask what they’re doing to provide safe dining for people who suffer from allergies, or simply those who want vegan foods. Their answers were exactly what I hoped to hear—they’re concerned about providing delicious foods for everyone who walks in, a true show of respect for their customers.

Luna Red in SLO immediately jumped to mind because chef Shaun Behrens has always provided a consumer friendly menu. He adds the symbols (gf) and (gfo), the latter meaning something on the dish can be left off, making the remaining food GF. For instance, his piquillo peppers stuffed with herbed goat cheese can be made safe simply by leaving off the seasoned breadcrumbs, or you could still enjoy the Luna burger sans bun. His menus also note if a dish is vegan (v) or vegan optional (vo).

I called restaurateur Shanny Covey to ask if they’ve always provided that information on their menus at the Covey family’s other restaurants, Novo in SLO and Robin’s in Cambria. 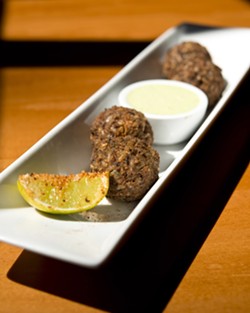 “In the past we had separate menus for gluten free and vegan requests, but a few years ago we decided to provide the information on all of our menus. Often there are only simple modifications to make any dish gluten free,” Covey explained. In fact, most restaurants do that now to avoid making those consumers feel outside the norm. Covey explained that she’s allergic to dairy and she tends to avoid meats, sticking mostly to vegan foods. Although the chef doesn’t have these allergies, she described Behrens as conscientious about ensuring GF choices appear on all of their menus.

“We’re very aware of dietary concerns. It has to do with how the food culture has changed. The move to promoting local, non-hybridized foods has become important. We always make sure there are vegan options, too.”

At Gather Wine Bar in AG, proprietor and chef Kari Ziegler  has a wine and beer friendly menu based on artisan foods from local producers. She can make nearly everything—even her s’mores tart—GF. Ziegler also noted that she doesn’t have celiac disease, but avoiding gluten prevented another dietary problem:

“I went through the Bon Appetit GF and dairy free cleanse and quit getting migraines,” she recalled. “Sometimes it’s not the food but what’s on it. That (diet) experience left me with a better understanding of how to season foods. There’s so much you can do to get around it. All of my soups are GF, I only add noodles to order.”

Not only that, she keeps Udi’s GF bread on hand so any of her “grown up grilled cheese” sandwiches are GF. If you can’t eat the bread that accompanies her warm blue cheese dip, she simply adds more of the vegetables to enjoy with it. She uses Trader Joe’s gluten free ginger snaps to make the crust for her s’mores tart.

“I find people call before coming in so they know what to order when they get here. If you’re allergic and find a good place to eat, stick to it,” she pointed out. “It’s really hard to keep everything perfect, but I clean everything really well and use a parchment covered sheet pan to avoid transferring gluten from other foods I’ve prepared.”

One of her most important suggestions was advising that consumers ask to speak to the chef. Then you’re assured you’re choosing foods that safely meet your dietary needs. She teaches her servers to come to her if there’s any question at all. She admitted she prefers talking directly to her guests to gauge their sensitivities since not everyone avoiding gluten is allergic.

At Thomas Hill Organics in Paso Robles, one would expect the management to be sensitive to people with allergies and that assumption is correct. According to owner and manager Debbie Thomas (her husband, Joe Thomas, manages their large organic farm in Paso), chef Julie Simon is quite sensitive to the needs of people who have allergies. “Most of our menu is gluten free but if there’s any doubt about something on the menu, our servers always come into the kitchen to ask Julie if that dish is gluten free or vegan,” Thomas explained. Unless you’re hoping for pizza, which GF people must avoid, you can pick out nearly anything on Simon’s menu and have the option of making it GF. Most choices are GF on Simon’s farm fresh menus with treats like baked green mussels with sweet Thai chili sauce and cilantro (without the buttered oats).

Intolerance to eating wheat doesn’t mean you have to give up bakery treats. At Éclair Bakery in AG, pastry chef Jeremy Davenport offers almond horns and macaroons, and will make special orders for cakes or cupcakes. “We don’t have a gluten free kitchen, but I am very cautious about cleaning everything before I make something I can safely say is gluten free.”

Got allergies? Forget the chains! Now you can relax knowing you can count on our artisan chefs to provide safe eats—they have the noble habit of always looking out for you!