The circus has come - and settled in - SLO

What child doesn’t want to run away and join the circus? How many adults secretly harbor that same desire to sever all ties with reality and enter a realm of imagination and creative expression? Fortunately, if a stint with the circus is in your future, a Greyhound ticket to a more urban, arts-forward destination like Los Angeles or San Francisco doesn’t have to be. SLO’s own circus arts collective, Fluid Luminescence, is building momentum—and flow—in the city’s parks, at parties and wakes, and at festivals like Burning Man and Lightning in a Bottle.

Chris Williams and Laurie Hobbs, both founders of the circus arts collective, stumbled across their own genres of performance art independently of one another, and of San Luis Obispo. Hobbs’ first encounter with spinning was at an overnight drum circle bonfire.

“Somebody had these LED poi and she was spinning them off in the dark and I was like ‘I gotta try that,’” she said. “I clocked myself in the head and gave myself a small concussion.” That was about eight years ago, and when she returned home to San Francisco she began looking for spinning groups. She found them, though the number of circus arts groups has grown exponentially in the last few years. But when she moved to San Luis Obispo to attend school, the search for a community of circus arts performers was a greater challenge still.

Williams began spinning five years ago during a three-month climbing trip to Thailand, where fire spinning in bars is fairly common. Williams and his traveling companion met people who knew how to spin fire, and they exchanged climbing lessons for fire spinning lessons. They purchased a staff and a pair of poi, and spent three months in Thailand practicing.

“When we came back to San Luis Obispo there was no one to spin with,” explained Williams. “There was a vacuum of fire performers.” 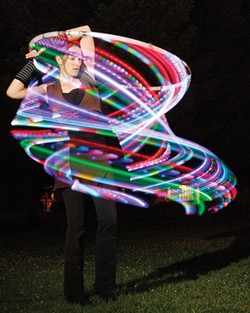 The group started, roughly, in 2004. Their earlier meetings were unstructured, just a group of spinners who met at a park once a month to share techniques. But, eventually, they decided to meet more regularly, and pool resources and ideas. Together, they could inspire one another and push boundaries of creativity.

Not surprisingly, a visit to Burning Man—which members of the group attend as friends rather than performers—helped to solidify their identity and direction. When they got back, they chose the name Fluid Luminescence.

“We wanted to convey that we’re into movement, and not some kind of angry fire-worshipping cult,” explained Williams.

Fortunately, establishing an identity for themselves leaves the door open for plenty of experimentation.

About a year and a half ago, the group performed for Farmer’s Market. They also spin, and hoop, at parties, weddings, fundraisers, and retreats, and did so once for a wake. Williams became the circus collective seamstress during the first gig, scavenging and altering appropriate clothing. Because they’re funding their own costumes and circus props, creativity is essential, and an ability to appropriate and reinvent materials at hand is a key skill for any modern circus performer on a budget. Williams would be happy to relinquish his crown, and thimble, to an accomplished costumer, if there was any to be found. 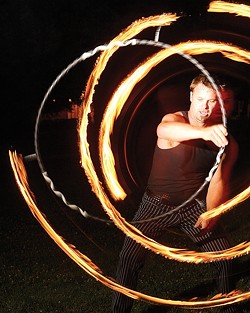 But while Fluid Luminescence is no longer the nameless monthly gathering of friends it once was, it’s not quite the big-top circus collective that it has the potential to one day be.

“We’re not at that full-on circus level yet but that’s definitely where we want to go and it’s just a matter of that 100th monkey jumping on board,” said Hobbs.

One of the more recent Fluid Luminescence enterprises is a series of HoopDance workshops for hoop dancers of all ability levels. Anyone who got a kick out of swinging a hula-hoop around his or her torso as a child should be a likely hoop-dance candidate. Hobbs recently attended a workshop with another hoop group, Hoop Path, based in North Carolina. According to Hobbs, hooping is currently experiencing a peak in popularity on the performance arts circuit.

“Hooping is a recent addition,” she explained. “It’s cool because this whole performance culture, every year there’s new art forms. I still remember when you’d go to Burning Man and see one hooper. To some degree it’s what’s in fashion, but it’s more playing and exploring.”

One Fluid Luminescence member is playing with the concept of hooping while fabric dancing, a trend that Hobbs and Williams expect to see take off in the next year or so. This cross-pollination of forms and techniques ensures that there will always be unexplored territory, new frontiers of art to experience. 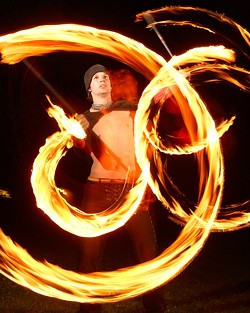 Fluid Luminescence workshops are for would-be hoopers over the age of 15. They take place Wednesday evenings, and Saturday mornings and afternoons. The skill levels are divided into beginning and intermediate levels. Classes cost $20, or $50 for three workshops, $80 for five workshops, or $100 for six workshops. The workshop location, ECHO Artspace in Grover Beach, was an ideal find for the group, which had been meeting erratically in Mitchell Park before discovering the South County’s do-it-yourself arts venue. It was, in fact, Hobbs who met aerial fabric dancer Rebekah Leach in Mitchell Park, and convinced her to host a fabric-dancing workshop at ECHO Artspace. Now, when Mitchell Park gets too cold for practice, the circus arts collective has an indoor rehearsal venue.

For anyone with enough whimsy, youthfulness, and energy to consider joining the circus, the qualifications are few. So, you don’t dance. So, you’re self-conscious. It may just turn out that hoop dancing or spinning poi is the best method of carving you out of that proverbial shell.

“The point of all these art forms is to achieve this wonderful thing called flow and what that is is improvisational dance,” explained Hobbs. “The point is to explore how your unique movement is. Flow is the state of being able to go from one motion to any motion simultaneously in the movement, exploring your body. It’s kind of like using a tool to open up.”

INFOBOX:  Circus in the park

Fluid Luminescence will be hosting Sunday SpinJams the first Sunday of each month from 2 to 5 p.m. at Mitchell Park. For more information visit www.fluidluminescence.com.