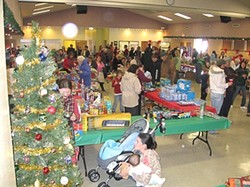 People tell me it kicks off their Christmas holiday,” said Jerri Walsh, talking about the annual Needs ’n Wishes holiday fundraiser, set for Dec. 12 from 10 a.m. to 8 p.m. at the South Bay Community Center, 2190 Palisades Avenue in Los Osos. Walsh is a member of the Homeless Advisory Council and one of many volunteers who, according to Walsh, “proudly claim their same jobs each year.”

Admission is free, and every penny raised has one destination: the Maxine Lewis Memorial Shelter for the Homeless. Vendors and families of SLO County have collaborated to sell their goods at the open house and give all proceeds to the shelter.

Enjoy free cookies and cocoa, visit with Santa, and shop at places such as Santa’s Toy Store, and Elf’s Craft and Gift Store. Don’t miss Mrs. Claus’s Baked Goods, a treat for the whole family. There will be a silent/ live auction, raffles, children’s dancing, school choirs, and live music all day.

“Everybody volunteers, everybody donates, and there’s no operating budget,” Walsh said. “The Christmas spirit in the room is just contagious!” The opportunity to donate is everywhere. If a child buys a toy, he or she has a chance to drop it in the Toys for Tots bin onsite, donating twice for the good of others.

Five-gallon jugs will be placed around the room, so bring your pennies—every one counts. Walsh recalled, “Last year we had to keep calling the Marines and firemen to empty the overflowing barrels of donations every couple of hours.” Although last year’s fundraiser was very successful, volunteers hope to raise the bar this Christmas since the need is even greater.

With the current economy, many are left without work, and end up at the shelter despite their efforts to stay above the poverty line. “Most people think of it as the bum on the street that’s drunk, but the majority [of homeless people] are families, a single mom with kids. The breadwinner gets sick and they get behind on the rent checks, next thing they’re out on the streets,” Walsh said.

The Maxine Lewis shelter offers meals; showers; mail, phone, and message services; as well as information and support to jumpstart an economically independent lifestyle. Homeless people in SLO County have the steady issue of finding a place to keep warm and rest during the night.

The Maxine Lewis website states, “Tonight between 2,500 and 4,000 people in San Luis Obispo County will be looking for a place to sleep,” and everybody wants a spot in the shelter. “Each night, the line at the homeless shelter may include adults of all ages and ethnicities, teens, and families with children.”

Year round, the shelter offers 49 nightly beds. “If you’re the 50th person, you don’t get in,” Walsh said. The shelter gives until they have nothing left, she noted.

“When they run out of beds, they give sleeping bags, then blankets, then sheets,” Walsh said, “but people end up sleeping down at the creek, and it’s very cold!”

This fundraiser will not only benefit the center by helping to continue their services, but also benefits the donors because they know they gave the gift of shelter to those in need. Welsh said, “Give as much as you can. Some give a little. Some are homeless themselves.”

SLO dad and small-business owner Tobin Risner has invented a product endorsed by health professionals. Healthy Handles, an attachment for a stroller, is adjustable and extendable, perfect for jogging parents. Chiropractor Daniel W. Willis said, “I wish my wife and I would have had this product while raising our two children. As athletes we spent countless hours walking and running behind our strollers, and I clearly remember the discomfort in my hands, neck, and lower back.” View the product video at Healthyhandles.com or call 1-800-805-6897. ...

Tom’s Toys, located at 682 Higuera St. in SLO, will donate 20 percent of sales on Thursday, Dec. 10, to Big Brothers Big Sisters of San Luis Obispo County. Owner Ted Frankel became a mentor to a 7-year-old boy 35 years ago. Now, at age 42, that child is a successful businessman with two children of his own. Because of Ted’s own experience with mentoring, he’s chosen to support Big Brothers Big Sisters through sales at his store. For more info on Big Brothers Big Sisters, call 781-3226 or log onto slobigs.org. ...

The Cal Poly BrewCrew, the university’s homebrew club, has teamed up with the brew masters at Creekside Brewing Co. to produce a traditional Northern English brown ale. Their creation, BrewCrew Brown, is malty with lightly roasted and nutty tones, and is available on tap at Creekside in downtown SLO while supplies last. For more info, contact Eric at 542-9804.