Central Coast Pride features something for everyone 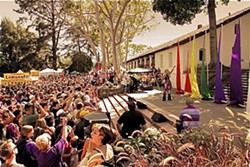 Fourteen years ago the Central Coast’s Gay and Lesbian Alliance joined a growing number of cities and towns offering celebrations of LGBT (lesbian, gay, bisexual and transgender) history and pride. They chose the month of July to avoid competing with similar celebrations in other cities, and the party has grown ever since with 4th of July barbecues, drag shows, and big-name guests of honor at the PAC culminating in a Pride in the Plaza festival on the final Sunday.

GALA has a lot of reasons to celebrate during this year’s pride, which began with an event June 11 and runs through July 11. President Obama is focusing on ways to expand benefits packages for same-sex partners of federal employees. During his State of the Union address on Jan. 27, 2010, he also committed to repealing the Don’t Ask Don’t Tell ban on gays and lesbians serving in the military.

But the community has also faced its share of setbacks. In May, students at Cal Poly’s Los Lecheros Dairy Club posted information about the organization’s formal on Facebook. Along with specifics about the date and time, there was an admonishment that same-sex couples were not welcome. Dozens of states have enacted constitutional bans on same-sex marriage, and in an even greater number of countries same-sex relations are illegal, punishable by fines, prison sentences, and even death.

“This is not just something the gay and lesbian people in this country are fighting for. There’s a bigger battle to be won,” acknowledged Central Coast Pride Coordinator Robert Kinports. But the larger vision doesn’t obscure the day-to-day challenges. Kinports plans to marry his partner when and if it becomes legal in California, but he still doesn’t feel safe holding his partner’s hand while walking down the street. Harassment, and potential violence, is always a threat. And if Kinports decides to put his partner on the medical insurance plan that he gets through his work, he has to declare the benefits on his income tax, something straight couples are not required to do.

Kinports’ mission is to market Pride as family-friendly, emphasizing the normalcy of the LGBT community. Normalcy is part of the Central Coast Pride mission statement, which Kinports paraphrases as “to celebrate our lives and our accomplishments, to demonstrate our normalcy, our numbers, and to educate the community about ourselves and our areas of concern.” To that end, he finds it problematic when the media turns exclusively to photos of the drag show to promote Pride. But he acknowledges that drag queens played a key role in one of the most momentous events in gay rights history: the Stonewall riots.

Tommi Rose, producer and emcee of the drag show taking place at Downtown Brew on July 9, described the role the drag queens played in starting the historic riots of June 28, 1969.

“The drag queens were sitting in a bar. Judy Garland had died. It was a very sad time. They were crying in their beer. The police had harassed the community for years and at that point it was the queens who said ‘we’ve had enough.’ That was the start of the gay movement.”

For many decades, drag queens were revered for their role in that night. But that sense of history hasn’t necessarily carried through to the present, insists Rose, who noted that the term drag queen tends to have negative connotations on the West coast.

“Most people think of a drag queen as a guy who puts on a dress and swoops around a bar on a broom,” he explained. But Rose has made a profession of female impersonation for 34 years, a career that enabled him to travel the globe and rub elbows with celebrities. 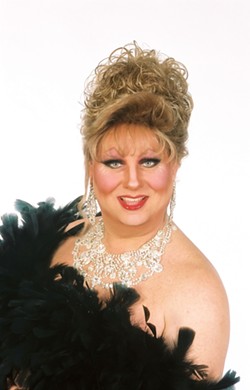 Rose started his career, accidentally, at a nightclub on a 4th of July weekend. He had watched the club’s show and heard that there would be an amateur contest later that night. At the insistence of his friends, and with some help from the professional performers backstage, Rose entered and won the competition.

The performer acquired his stage name by accident as well. While at a New Year’s party one of Rose’s friends announced that the drag queen resembled his aunt, Rose. The performer happened to have an Aunt Rose as well, and considered it a nice, theatrical name.

Now a Palm Springs resident who performs a regular Sunday show at Toucans Tiki Lounge in Palm Springs, Rose was asked to organize Central Coast Pride’s drag show, which includes selecting the talent. Though Rose’s preference is a little more traditional—showgirls and Broadway numbers—he insists that finding performers with diverse talent is key.

“The hardest thing to do is get the right mix of girls. I’ve got a showgirl. I’ve got someone who does comedy. I’ve got a girl who is a dancer. So you don’t have everybody doing a ballad. It’s got to be very smooth putting it together, so there’s a little bit of something for everyone.”

And Rose will be performing comedy between each of the acts, keeping the audience energy level high. It’s no small effort preparing to simply step out on stage during a drag show. After three decades in the industry, Rose can apply his makeup for a show in 20 to 25 minutes, but some performers require several hours. Then there are myriad small, but important details. Wigs must be constantly styled and cleaned. Performers have to girdle and cinch to give themselves a waistline, and rely on padding to create the illusion of breasts and hips. But at 51 years old, Rose wouldn’t want to do anything else, and jokes that one day they’ll have to drag him off the stage.

As for the people who are critical of his profession or lifestyle, Rose is comfortable in his skin, and the world he has created for himself. He jokes about his sexuality onstage, claiming that his mother knew he was gay because his birth was preceded by three yards of yellow chiffon, a red sequined dress, and a Judy Garland record.

“Just because you don’t understand a lifestyle doesn’t mean they’re wrong,” he said. “I have a lot of friends in the leather community. I personally don’t understand it. It happens in every community. We just have to get beyond that and look at everybody as individuals.”

Because the city has a history of being supportive of GALA’s pride events, Kinports is proud that the festival returns the favor by working as a draw for outside visitors. Much of the growth of the annual 4th of July barbecue is due to patronage from the Central Valley. Kinports estimates last year’s attendance at 300 people, and GALA serves them all with a barbecue and drinks for free. The Freewheelers Car Club—“the world’s oldest gay classic car club” according to the organization’s website—will be hosting its West Coast Meet on July 10 at Embassy Suites in SLO.

If barbecues, classic cars, a drag show, and festival at the Mission aren’t sufficiently alluring, comedian Lisa Lampanelli—billed as Comedy Central’s “Queen of Mean”—will be performing at the PAC on July 10. The shiny new GALA center on Palm Street will also play host to an art reception on July 2. And even after the last of the 4th of July burgers have been digested, the drag queens’ wigs sent to the shop for cleaning, and the face paint cleared from children’s faces, GALA welcomes and depends upon community support. This can come in the form of financial donations, votes, or even support in a social situation when someone makes a homophobic slur. The pride festival might come just once a year, but respect never goes out of style.