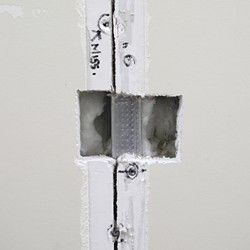 If it weren’t for the crumbling drywall, the SLO County Government Center might have been the beacon of a thriving government its design appears to imply. But the drywall is crumbling—and that’s not the only problem, according to county officials who are now suing to get the building fixed.

Legal expenses alone from the lawsuit, filed in April, are expected to run around $300,000. SLO County supervisors approved the expected legal costs to be taken from county contingencies on Nov. 24. If the cost seems high, it’s because the county is expecting a big payout, at least $1.5 million if they win.

According to the county’s legal complaint, the construction team tasked with building the government center in downtown SLO breached contracts by failing to properly construct and inspect the building. Kajima Construction Services, Vanir Construction, and Hayer Consultants were all named as defendants in the case. All three companies were hired for various roles in the project—construction, construction management, and inspection—which was contracted in October 2002 and completed in spring of 2005.

“So far, our inspection has shown that every floor exhibits improper installation of the drywall,” Neal said. Some of the defects include cracks and drywall that wasn’t screwed into studs.

A representative for Kajima, the first listed defendant, could not be reached as of press time. In court documents, all three companies denied any fault, saying the county waited too long to file the complaint and the damage could have been the result of “an act of God,” among other reasons.

The contract for the government center came in at just under $25 million. With such a large, expensive project, how could such substantial problems slip by, especially when the county has a team of building inspectors? Assistant Building Official Jim Casper, when asked this question, said county employees didn’t perform the inspections on this project. In fact, he added, most government projects are freed from the typical local inspection and approval processes facing local projects.

“There are certain circumstances where buildings are not under the jurisdiction of the local agency,” Casper said.

For this project, the county relied on third-party inspections provided by the various contracted companies, which usually use fulltime, onsite inspectors, Casper said. Most county inspections are performed periodically, he added, and are less scrupulous than large-scale government projects.

A case management conference is scheduled for Jan. 28. Meanwhile, the county has hired a team to survey the damage and determine how bad the damage is and how much it will cost to fix. And the legal expenses are expected to be more costly than the typical run of county cases. Neal said it’s not uncommon to have around $150,000 in legal fees, but in this case, experts need to be called, reports need to be made, and court depositions have to be paid for. ∆