It took a number of serious miscalculations and failures in leadership to get the Paso Robles Joint Unified School District into the unfortunate financial situation it's in today.

That's according to a recently released SLO County grand jury report that details what led to the district's second financial crisis since 2012, which the report says serves as a "a cautionary tale" for other school districts in the region. In the 28-page report released on Nov. 17, the jury blames several accounting errors, a lack of oversight, and shortcomings on the part of the Paso Unified's former superintendent, the former board of trustees, and the SLO County Office of Education for draining the district's reserve funds between 2015 and 2018. 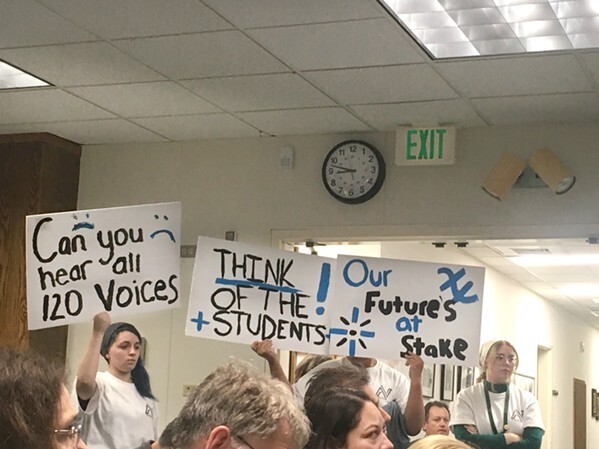 "The financial problems that developed at the Paso Robles Joint Unified School District were a result of the actions of three groups charged with school system oversight," the report reads. "Their collective failures to control or report on excessive expenditures created a fiscal crisis that will take time and hard work to resolve."

Former Superintendent Chris Williams was hired in August 2014, according to the report, shortly after the district had pulled itself out of another financial crisis in 2012. At the time, Paso Unified had managed to put about $3.9 million into its rainy day fund, equating to about 7 percent of its overall budget and sitting well above the minimum 3 percent reserve required by the California Department of Education.

By the end of Williams' first term in 2015, the district's reserve was equal to about 10 percent of its overall budget. But at the end of the following year, that had dropped back down to about 8 percent, and by the end of the 2016-17 year, the reserve had declined to 4 percent. When the 2017-18 fiscal year was all said and done, Paso Unified had just $306,172 left in its reserve, equating to less than a percent of its budget.

"Between 2015 and 2019, nearly $6 million in reserve funds were depleted," the report reads. "This was primarily due to administrative and accounting errors, poor fiscal planning, and improper management guidance."

Overestimated average daily attendance—which the state uses to determine how much funding will go to a school district—from 2016 to 2018 led to an unexpected loss of more than $1 million, according to the grand jury report. The district also improperly calculated its transportation costs—leading to another surprise seven-figure expense—and made mistakes in calculating accounts payable. It miscalculated the number of students in need of free or reduced meals and submitted food service expenses that were ultimately rejected by the state; insufficiently planned for pension and salary increases; and underestimated the true costs of new hires, facilities, and programs that Williams launched in hopes of attracting new students and ultimately boosting the district's revenue.

The grand jury blamed these mistakes largely on mismanagement and inexperience caused by high turnover rates among financial administrators. In the four years that Williams served as Paso's superintendent, there were four different chief business officers and four financial managers, and Williams twice served as the district's interim chief business officer for six months total.

"Beyond lacking the experience for this role," the report reads, "it left a serious gap in accountability with no systems for checks and balances."

Paso's current superintendent, Curt Dubost, said that while previous audits and internal investigations had already revealed much of what was included in the recent grand jury report, he found it to be a fair account of what happened.

"Unfortunately the enrollment projections were too rosy," Dubost told New Times, adding that those errors led to huge job and program cuts carried out as recently as March of this year. "That's the main message here: You can't count on rosy projections to balance your budget."

The district, he said, fully intends to consider the 16 recommendations laid out in the report, and many have already been implemented. While the district's reserve is currently back up to about 10 percent of its overall budget, Dubost said much of that is one-time CARES Act funding that has to be used by the end of the year, and projections show that Paso's enrollment will likely decline in coming years, leading to more declines in revenue.

There's a lot of rebuilding to do in the district, and Dubost said that while he understands the community's mistrust, he hopes everyone can come together to help address the serious issues that lie ahead—including getting kids back to school safely—rather than those of the past.

"At some point we have to move forward," Dubost said.

That's what James Lynett hopes to see too. Lynett is the executive director of the Paso Robles Public Educators union, and he said that a number of community members and newly elected trustees have expressed interest in further investigating Paso's most recent financial crisis and rumors surrounding former Superintendent Williams.

While Lynett said he too wants to see justice served, he said there have been plenty of investigations and audits of the situation. He doesn't believe there's any big conspiracy behind the reserve losses, just incompetence.

"I feel like really it's time to move on and learn the lesson from this," he told New Times. Δ