Grand View Apartments owners claim that nonpayment from their tenants and an estimated $2.5 million in repair costs is leaving them no choice but to go out of business and kick out the residents.

Francisco Ramirez, a tenant at Grand View Apartments, told New Times he received a 60-day termination of tenancy notice that took him by surprise. 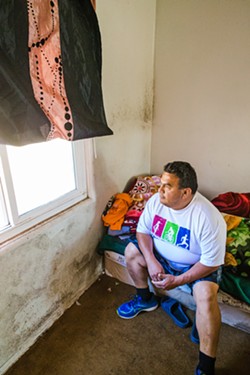 "I was scared, and all of my neighbors started calling me. They were very anxious and afraid they would have no place to go and would have to live on the street," Ramirez said. "Many of them are looking for somewhere else, but there aren't a lot of apartments available for rent in Paso Robles."

The owners, Ebrahim and Fahimeh Madadi, claim they are not evicting the tenants, according to court documents filed on Aug. 21. They are notifying the tenants of their decision to go out of business and take the property off the rental market.

According to the documents, because Grand View is going out of business, the owners aren't obligated to provide relocation benefits. However, if tenants comply with the termination notice, the owners said they will refund security deposits in full.

Stephanie Barclay, the legal director for the San Luis Obispo Legal Assistance Foundation who's representing the Grand View's tenants in a lawsuit filed earlier this year over apartment conditions, said the eviction process always begins with a termination notice. After that time runs out, Barclay said, if a tenant stays on the property, the landlord has to file and serve the tenant with an unlawful detainer lawsuit, which a tenant has five days to respond to.

"Only the sheriff can enforce a court order evicting a tenant after the tenant has had an opportunity to respond. Many tenants do not realize that the landlord must file and serve an eviction action and get an order from the court before they can legally evict," she said.

Barclay said it's her opinion that the notices Grand View sent to tenants violate temporary orders issued by the SLO Superior Court on May 28. Those orders were meant to protect tenants from retaliation and prevent the owners from collecting rent. She and Hutkin Law Firm have filed a petition with the court requesting that Grand View be held in contempt for those actions.

According to the court documents, Grand View's owners are both in their late 70s and suffer from numerous health issues. The apartments, the documents claim, are their only real estate investment and until their tenants sued them, they had no knowledge about Grand View's condition.

After the lawsuit was filed, the owners hired a consultant to review the property, documents state, and he advised them that it was not safe for tenants to remain on the property.

"This information was difficult and shocking for the owners and has left them with few options," court documents stated. "Without rental income for what is likely to be an indeterminate amount of time, Grand View Apartments is now faced with the possibility of not being able to pay the mortgage, taxes, and utilities in the near future. [The owners] realize the difficulties that this will cause the current residents, but those difficulties must take a back seat to the current health and welfare risks posed by remaining."

Barclay said she and Hutkin Law Firm will be arguing that it is unfair to allow this landlord—"who had reaped all of the benefits and none of the burdens of being a landlord—to just go out of business and evict all of the tenants the moment they are required to perform their end of the bargain and provide safe housing."

"Regardless of the outcome at the contempt hearing, the damage has been done. Grand View has instilled fear and confusion in its tenants who already feel extremely vulnerable," Barclay said. "Grand View is sending a message to its tenants loud and clear, which is: We don't have to comply with the law."