Grandma Ingrid greets everyone who enters her house with a hug on the front stoop. Breakfast is waiting inside along with a cup of coffee or hot cider. People gathered around the large kitchen island are already cooing about the potato casserole.

I do want to try it, but I'm too busy staring at the two chocolate cakes staring back at me, centered just so on the counter, daring me to grab a fork. Between them sits a bowl full of candy that Ingrid Hilton and her daughter, Nicolle Olson, will be teaching 22 women and children how to make on this Saturday morning in February. 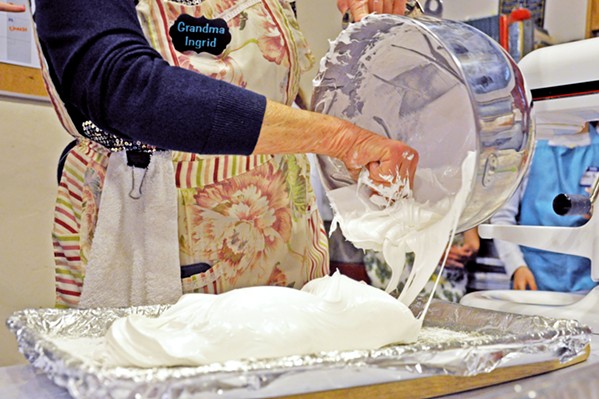 White chocolate fudge with sour cream and apricots. Chocolate fudge with marshmallow cream. Peanut butter balls and coconut bonbons dipped in chocolate. Clusters of dry roasted and salted peanuts drenched in chocolate. Yes, there's a lot of chocolate in this farmhouse today. It's melted in double boilers atop induction burners on either side of the sink, stacked into tubs of pre-prepped ingredients, and already packed in to-go containers for the guests.

Nicolle gets things started, and people move in closer around the island.

"We want you to feel like you're coming to grandma's house," she says. "She'll never cuss you out; she might scold you a little bit if you're packing your flour."

Everybody laughs as she points out the packets of paper on a table next to the hearth. It's a list of candy recipes. Nicolle then tells everyone to make sure they have a name tag on. This is your community, she says. These are your people.

"Take these recipes, make them your own, pass them along," Nicolle says. "We want you guys to feel welcome and feel empowered ... empowered to make food."

Tucked away down a dirt road on the Arroyo Grande Mesa, flanked by farm fields, Grandma Ingrid's home is a weekend haven for students eager to learn how to cook. Nicolle grew up here, learning to can fresh vegetables plucked from the garden, whipping up cookies or candy when the mood was right, throwing things together for breakfast, lunch, and dinner.

"It's super simple—people over-complicate things," Nicolle tells me. "I know it's healthy. It doesn't have all the preservatives in it." In this house that Ingrid's husband was raised in, she coaxes folks through the art of bread baking and cheese making, noodle stretching and vegetable fermenting, piecrust perfecting and gravy stirring. You name it, Ingrid's taught it, and if she hasn't, she probably will if you leave the suggestion on her white board.

The class today is a mix of first-timers and ladies who have been to Grandma Ingrid's multiple times. One family visiting from Bakersfield thought this would be a fun thing to do with the kids, and one woman says she drives up from Long Beach to attend the classes.

Nicolle tells the group that she pitched the idea to start teaching cooking classes out of the family farmhouse after an incident with a colleague she worked with on an ambulance. They were putting together a meal for a fundraiser and Nicolle's colleague asked what she could do to help. Nicolle responded by asking her to make a salad.

"I'd love to but I don't know how," Nicolle says her colleague responded.

A little bit dumbfounded, Nicolle tells the group that she realized something that day.

"Something's been lost in translation," she says. "Not everybody grew up like I did."

Grandma Ingrid's is starting its third year of cooking classes, but Ingrid herself has been teaching people how to cook for more than three decades. She's been a Master Food Preserver for 30 years, teaching classes at fairs and schools around the state. 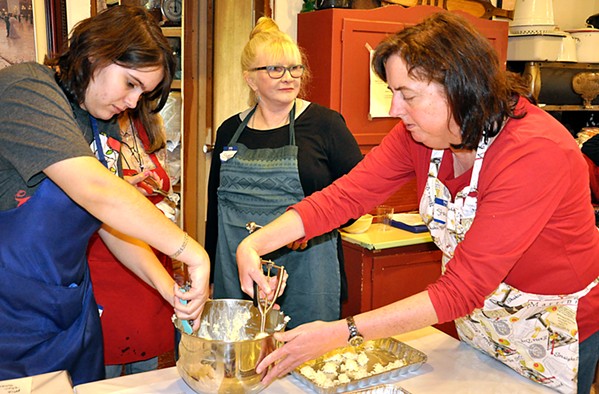 She worked with a teen pregnancy group, teaching the soon-to-be moms about keeping cupboards stocked for cooking on a budget. To spark their interest, she started with chocolate syrup.

The class grew from there, and she eventually taught the teens how to make baby food. Ingrid has also worked with low-income individuals through a faith-based program, helping them make a dollar go farther in the kitchen. She's taught families how to prep food together. For her, cooking is all about building self-esteem, overcoming the fear of what's unknown, and moving past "I can't."

"I love looking at someone and seeing that they're getting it," Ingrid says. "It's self-worth."

Everyone is busy, and it can often be easier to rely on instant food or go out to dinner, she says. Families spend less time in the kitchen than they used to, and the tradition of making food is getting lost in that transition. It can be just as rewarding to spend that extra time in the kitchen cooking something from scratch, together.

"It's not that it takes that much longer than opening that can of Campbell's soup," Ingrid says. "But you have to plan."

Giving people the tools to make things happen is real, she says.

So is teaching budding chefs that it's OK to make a mistake, try new things, and press on after a failure.

On this sunny day between threats of rain, the humidity is about 82 percent. When Grandma Ingrid planned the candy classes, she didn't expect it to be raining almost every day in February.

"Water is your enemy when it comes to chocolate," Ingrid says. "You should never make candy in the rain—sometimes it works, sometimes it doesn't. The extra humidity in the air can affect your candy making."

And yet, we press on. Ingrid and Nicolle kick off the demo with peanut brittle. Obviously frustrated by the wet air, it takes Ingrid a little longer to bring her sugar and Karo syrup to a rolling boil than it normally does, but it gives her time to toss out some tips and tricks.

"A full roiling boil is a boil that you cannot stir down," she says.

After she's done with that, she moves on to homemade marshmallow. As we wait for the mixture to get to the right temperature, her granddaughter Harper takes a spin through the crowd with some vanilla marshmallow Ingrid and Nicolle made earlier in the week. Nicolle hands out marshmallow flavored with cinnamon and chili powder. It's freakin' delicious.

They break us up into four groups, and we split up between the stations. One's on chocolate peanut butter balls, one's on coconut bonbons, one's making nut clusters and bark, and one's on chocolate dipping duty. They feed us homemade chicken noodle soup with fresh noodles. Everyone gets chatty, laughing, talking about food and family.

"I think people relax around food, and they can take things in better," Ingrid tells me. "They learn better in a group like this because they don't feel like someone's just staring at them, watching their every move. I think you can really learn that way, and they keep coming back." Δ

Editor Camillia Lanham is addicted to peanut clusters at clanham@newtimesslo.com.