Aaron Draplin is a man of many talents. If you go to his website, look under the “About” section, and click on his “Professional Titles,” you’ll find a cavalcade of occupations both strange and wondrous: Junior Sasqualogist, Guitar Strummer, Junior Noodler, Carny, Master Junker, Philatelist, Record Collector, Anachronism Detective Draplin is a Renaissance man, but, first and foremost, he is a graphic designer and the sole proprietor of Draplin Design Co. Based in Portland, Oregon, they do everything from album covers to hot dog stands to logos for the Obama administration. Again, he’s a Renaissance man—and one whose work you can soon see at Cal Poly’s University Art Gallery.

“If you’ve ever researched him or watched a YouTube video about him, you realize what a force of nature he is,” said gallery coordinator Jeff Van Kleeck. “Look at his book. It’s so iconic, and it sticks out. You can tell it’s the work he did. He has a very specific style … and he’s kind of worked on everything, come out with his own products, and branded himself with a brand. His story’s really interesting, too. He wasn’t afraid to work from the bottom.” 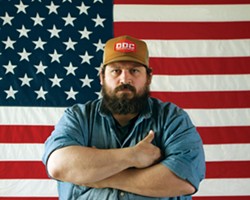 In his own words, Draplin was “bred from the loins of the proud Midwest.” More specifically, he was born in Michigan and raised with that kind of strong, midwestern work ethic that prizes utility and pragmatism. Like most artists, he got his start early—drawing little logos and designing typography even as a kid. But where he really cut his teeth in design was in the world of skateboarding.

“Skateboarding offered this beautiful creative look into self expression,” Draplin told New Times. “And it was fun. It was sketchy and dangerous. The art was all theirs. It wasn’t something like a sports team where there’s a guy who owns the time; this was daring. There was the lore and love of punk rock, and it was all from our hands. It was not perfect. That same thing really carries me through to this day.”

Indeed, Draplin’s aesthetic and approach haven’t changed all that much since those Dogtown days. After working his way up, through snowboarding magazines and a gig at Portland’s Cinco Design Co., he opened Draplin Design Co. in 2004. Soon, he began designing for big clients like Nike, Esquire, Burton Snowboards, and Sasquatch Music Festival. But the small clients are there, too: local bands, food trucks, and friends in need of an aesthetic identity. Along with his girlfriend (she does the shipping), Draplin does all the work himself and has become a prominent advocate for the do-it-yourself, back-to-basics mantra.

On YouTube, you can find dozens of videos of Draplin—talking about and teaching design with his characteristic, no-holds-barred gusto. In one video, he fashions a laurel leaf vector in the same amount of time it would take me to unwrap and down a Snickers bar (pretty darn fast). His style embodies clean lines, bold colors, and an old-school simplicity that emphasizes access and efficacy in place of opulence. This kind of personal, no-frills approach is the same attitude Draplin brings to the whole process of creating logos, brands, ads, and his own line of handy-dandy notebooks—Field Notes.

“There’s ways of sort of spitballing to see what the spirit of something is,” he explained. “It’s no different if it’s a band that has no money. It’s the idea of can I quickly get to what do you guys need help with. Just kind of bullshitting with each other. It’s no different than the guy who needs help with a logo for something. Just tell me what you guys do. … It’s all based on conversations, and you work back from that shit.”

Draplin is a rarity in the design business. He collects and covets the stuff of a bygone era (neon motel signs, railroad car logos, and boxes of nails that harken back to the ’40s and ’50s), but he is also a consummate modernist (Futura is his font of choice). He boasts corporate accomplishments, but still exudes a homegrown, artisanal ethic. His embraces technology, but he champions hand drawing and and a personable, human touch. He works in advertising, but he is an artist through and through.

These all seem like complex contradictions, but the virtue of Draplin is his magnetic ability to cut through the shit, to have fun, and to get to the core of something, whether it be in conversation or in the logo for a Herpetology Society.

He tells it like is—as a person and in his designs.

“I think it’s just invention,” Draplin said. “I can invent some neat little thing for ironic reasons or for a functional reason that surprises people. It’s just communication in the end. Look, weddings freak me out. They’re bloated and gratuitous. But when you go to one, and they’re good for each other, and they have a memento, they attach something wonderful to it. That’s what I love about graphic design. If there were hand-done cards … on a nice letterpress. If it’s all stuff from Target, it’s all forgettable. Someone took the initiative to make it special. That’s the shit I love. Design elevates something to what it should be, whether that’s a wedding or a band’s flyer.”

Jessica Peña’s busy unwrapping that Snickers bar. You can reach her at jpena@newtimesslo.com.