Greasier than a tube of deep fried Brylcreem!

Mad Sin and The Chop Tops rumble into Downtown Brew 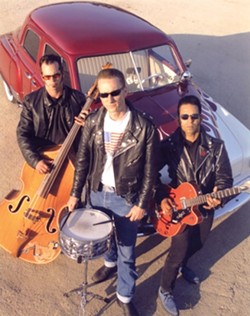 Mad Sin hails from Germany, which began in 1987, playing gigs around Hamburg in clubs and on the streets to finance their daily booze intake. They signed their first record contract 1988 with a dubious figure from Hamburg's underworld, and the resulting album became a classic in the German psychobilly scene. After a couple more albums on small labels, Polydor came to the band and offered them a giant pile of cash, leading to the release of 1998's Sweet and Innocent? ... Loud and Dirty!!!. Unforunately, the band and label didn't get along very well, so Polydor gave them another pile of cash to leave and not let the door hit them on the way out. Mad Sin's newest offering is Survival Of The Sickest on People Like You Records! Come on, people, you need a little psychotic hellbilly beat in your lives.

An oaky nuttiness
If the Live Oak Music Festival were a wine, it would be an eclectic little cuvee with a hint of nuttiness. It seems year after year this long-running and much-loved event manages to attract an array of performers who radiate zany fun. 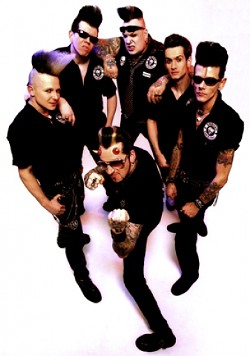 # You can get the full schedule and arrange tickets at liveoakfest.org, but a few highlights of this year's festival are in order. On Friday, June 15, Eliza Gilkyson, a Grammy-nominated singer-songwriter with what's been called a "Dylanesque poetic imagination" is set to perform, as is Sonny Landreth, another Grammy-nominated musician, who plays a mean bottleneck blues guitar said to "set the swamps ablaze."

Saturday, June 16, features Grammy-nominated bluegrass singer/songwriter Claire Lynch, and Nathan and the Zydeco Cha Chas, who play their own brand of "swamp'n'roll."

There's also a whole mess of other performers, plus the festival is a favorite of musicians, who come to camp and jam. It seems there's always music going on somewhere at Live Oak. 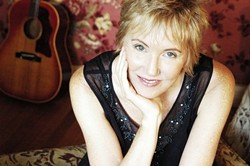 In addition to acoustic guitarist Gass, Trainwreck includes JR Reed on lead vocals and percussions, John Konesky on electric guitar, John Spiker on bass and backing vocals (both Johns were backing musicians on the Tenacious D's Pick Of Destiny world tour) and Naterothacker on drums.

"You find friends you like to hang out with, you need some glue, you need a reason to hang out and spend time together, and music is our easy excuse," said singer/guitarist Bryan Garza.

Over the years the band self-released a full-length album Bruno, toured the U.S. and U.K. incessantly with bands like the Arctic Monkeys, Paul Weller, Dirty Pretty Things, Blonde Redhead, Shiny Toy Guns, Grandaddy, Metric, the Fratellis, and Panic! at the Disco, among many others, and released two singles on Rough Trade records in the U.K., home to Belle and Sebastian and the Strokes.

Once the humble little former-SLO Town band opened for the Arctic Monkeys in front of 10,000 screaming Berliners.

"The stadium was so packed that people's fingers were at the pedals and their chins were onstage. If you sported a bone, everyone would see," laughed Bryan.

The group now calls San Francisco home, and they're set to release their second full-length, Underhanded Romance, on July 12 via Eenie Meenie Records. To celebrate, they decided to return to where it all started with a show at Downtown Brew on Thursday, June 21.

Nothing Ever Stays and Geisert 8 will open the 8 p.m. Downtown Brew show. Tickets are $8 advance at Boo Boo's or $10 at the door. This is a 16-and-over show.

More music
What do you get when you mix reggae, hip hop, funk, and rock

# into a socially conscious groove stew? Native Root a band that's played SLO Town for the last couple of years, winning more and more fans every time they appear. The group recently released N.Root, a collection of tunes featuring Matt Burke's tight raps over reggae grooves. The band's sound is fattened up by a saxophone and trombone, not to mention the occasional didgeridoo. This Thursday, June 14, they play Frog and Peach. Learn more at www.nativerootmusic.com.

Naomi & The Courteous Rudeboys blend soul, funk, and reggae grooves into an upbeat dance stew that's made them a West Coast favorite. They tour, like an increasingly large number of bands, in a bio-fueled bus, and they're set to release their debut CD, Beautiful Beings, next month. This Friday, June 15, they'll play Sweet Springs Saloon with local opener Cephalopod, but this summer will also find the socially conscious band playing Colorado's Dreamtime Festival as well as Earthdance in Northern California. The show starts at 9 p.m. and costs $5.

night between 5:30 and 7:30 p.m. from now until the end of August. The concert series opener on Friday, June 15 is progressive funk act Siko.

Santa Margarita's going to turn into a Louisiana swamp this Friday, June 15, when the Creole Syncopaters play The Porch beginning at 7:30 p.m. The spicy southern act knows how to heat up a dance floor, so be prepared to shake your moneymaker.

# Smokin' blues trio The Jerome Washington Express has a few upcoming gigs over the next couple of weeks, starting with my favorite place to see this band, Old Cayucos Tavern, which they play on Friday and Saturday, June 15-16, at 9 p.m. The band also plays Friday, June 29 at the Avila Bay Club at 6 p.m., Saturday, June 30 at Frog and Peach at 10 p.m., and Sunday, July 1 at the Salisbury Vineyard Concert Series (the old school house in Avila) at 1 p.m. This is a band that can play everything from Texas to Chicago to Delta blues. Ü

Rocking guitarist Cliff Stepp will provide the entertainment for Father's Day aboard the Morro Bay cruise boat Papagallo on Sunday, June 17, from 1 to 4 p.m. The music cruise includes gourmet appetizers and a full, no-host bar. Reservations are required, so call 927-5705, or go on-line to morrobayboat.com.

On Sunday, June 17, pianist Bill Cunliffe and his trio will play a Father's Day concert as part of the Famous Jazz Artist Series at the Hamlet in Cambria. The group will perform selections from their latest album, Bill Plays Bud, a tribute to the legendary genius of modern jazz pianist Bud Powell. Cunliffe's trio includes bassist Darek Oles and drummer Joe LaBarbara (Bill Evans, Tony Bennett). Concert co-producers Charlie and Sandi Shoemake (vibraphone and vocals) will also be on hand.

# Local acoustic guitarist Tim Pacheco, who recently appeared on the compilation album Cole Porter: DeLovely Guitar, will perform with another stellar local guitarist Martin Paris on Sunday, June 17 at 1 p.m. at Castoro Cellars Winery. DeLovely Guitar is a collection of solo acoustic guitarists playing Cole Porter tunes, and in addition to Pacheco, the album includes notables such as Laurence Juber, Doug Smith, and Kenny Sultan. The CD was released by Solid Air Records as a follow-up to its Grammy-winning CD Pink Guitar: A Tribute to Henry Mancini. Call Castoro Cellars for ticket information: 238-0725.

Acoustic duo Notorious plays the next Red Barn Community Music Series concert at the Red Barn, next to the South Bay Community Center in Los Osos, on Thursday, June 21 at 7 p.m. As always, the evening begins with a 6 p.m. potluck and old time jam. A $10 donation is requested at the door. Notorious features fiddler Eden MacAdam-Somer and guitarist/banjoist Larry Unger, who perform traditional and contemporary acoustic music from around the world, music full of rhythmic drive and melodic candor. You'll hear everything from traditional American and Celtic fiddle tunes to jazz, blues, and the duo's original compositions.

The Air Pollution Control District is sponsoring a free concert with youth jazz ensemble In Black at Mission Plaza on Thursday, June 21, at 7 p.m. The Sonoma County band, whose members range from 14 to 16, performs swing, standards, and straight-ahead jazz. The performance is part of the band's Solutions Tour, intended to increase awareness of climate change and what individuals can do to reverse its effects. The APCD will have informational tables, alternative fuel cars, and other activities available during the concert.

Glen Starkey is cutting back on fun. Help him stay on his funless diet with words of encouragement at gstarkey@newtimesslo.com.