The Great American Melodrama and Vaudeville presents The Holiday Extravaganza through Tuesday, Dec. 31. Tickets to the show range from $28 to $33. The theater is located at 1863 Front St., Oceano. Call (805) 489-2499 or visit americanmelodrama.com for performance times and more info.

Christmas may be behind us, but there's still time to see the Great American Melodrama and Vaudeville's annual holiday production.

The Holiday Extravaganza—which shows at the Oceano theater through Dec. 31—begins with a one-act version of Charles Dickens' A Christmas Carol, directed by Dan Schultz. Billy Breed is perfectly miserly as Ebenezer Scrooge. After a chilling encounter with the ghost of his deceased colleague, Jacob Marley (Jeff Salsbury), Scrooge is visited by three spirits throughout the course of Christmas Eve. 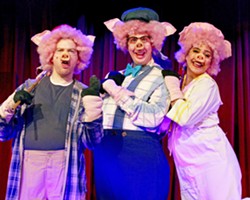 The first, the Ghost of Christmas Past (Jocelyn Lonquist), teleports a reluctant Scrooge to a simpler time, when his whole life was ahead of him. We see glimmers of warmth in Scrooge's persona for the first time, especially as he watches his younger self dance at former employer Fezziwig's (Toby Tropper) Christmas party. We also see a regretful shade of Scrooge, as he relives the bitter end of his relationship with Belle (Madison Kisst), an old love. 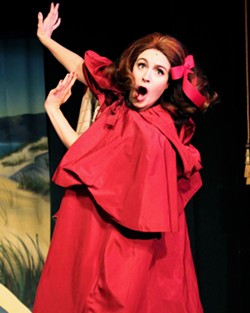 The regret continues when the Ghost of Christmas Present (Tropper) takes Scrooge to the home of his assistant Bob Cratchit (Ben Abbott) and his family. Witnessing Cratchit's circumstances—including the state of his critically ill son, Tiny Tim (Cadence Clift)—forces Scrooge to reevaluate the conditions he may have forced upon his employee through poor pay and long hours away from home. Can Scrooge make amends in time before the tragic visions presented by the Ghost of Christmas Yet to Come (Mike Fiore) come true? Most of us know the answer, but it's the ride that counts and the talent behind this iteration breathe fresh life into the classic Dickens tale.

Following A Christmas Carol is the Melodrama's humorously hammy adaptation of "The Three Little Pigs" story. Director and choreographer Karin Hendricks helms this porky portion of the show, which stars Abbott, Fiore, and Sydni Abenido as the fable's titular heroes. Through trial and error, the trio realizes a house made from bricks, rather than hay or sticks, could be their last line of defense against the Big Bad Wolf (Salsbury). 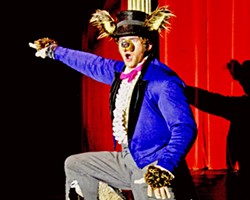 Other fairy tale-ish characters get thrown into the mix along the journey, including a Fairy Hogmother (Kisst) and Little Red Riding Hood (Lonquist), who gets to sing one of my favorite songs in the show, a spoof of Lizzo's "Truth Hurts." It's high praise because the Extravaganza's final section, The Central Coast Holiday Vaudeville Revue, features the Melodrama's traditional Reindeer Rap, a hysterical amalgamation of song parodies. Directed by Eric Hoit, the Revue also includes the company's famous, seasonal Water Glass Orchestra, which—unlike Santa—has to be seen to be believed. Δ