Bask in the glory

It's a brand new year, and along with lots of broken resolutions, it's time for a brand new season of local theater. First up this year is Baskerville, a comedic spin on a classic Sherlock Holmes tale produced by the Great American Melodrama in Oceano.

Baskerville is written by Ken Ludwig, the same playwright who penned the Tony-award winning Lend Me a Tenor. Central Coast theater fans will recognize it—a musical version of that play ran at The Pacific Conservatory Theater PCPA in 2017. 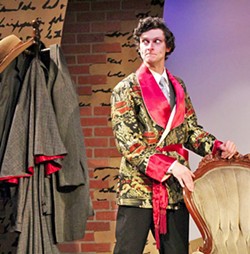 Baskerville is based on Sir Arthur Conan Doyle's novel The Hound of the Baskervilles, a gripping and bloody tale about the killing of two heirs to a long-cursed family in the English countryside. The world's greatest detective, Sherlock Holmes, and his faithful ally Dr. John Watson take up the case, peeling back layers of dark family secrets and more. It may not seem like the ideal material to turn into a two-act comedy, but Ludwig pulls in enough absurdity and witty dialogue to make it work.

While Ludwig is an adept humor writer, prone to punny one-liners and laugh-out-loud zingers, it's not the material that carries the production so much as the mind-blowing act of carrying it off. No more than five actors play dozens of roles. (Please don't email our proofreader to complain about typos; that's the actual number of actors assigned to all these roles.)

The result is a whirling spin cycle of comedy bits and hectic romps across the stage, accompanied by the ever-present wink to the audience to let them know everyone is in on the gag. The play is oh-so creative about ways to fling one actor into the role of the next character, and it's quite frankly the best and funniest part of the production.

Layne Roate and Eb Madson do an appreciable job as the Holmes and Watson pair. Roate is a lanky and sharp-boned figure who emotes with fire in his eyes and manages to both present a Holmes that is all at once comforting and familiar, yet brand new at the same time. Madson has solid comedy chops and does well pulling off some of the play's physical gags.

Eleise Moore, Nicholas Wilder, and Mia Mekjian earned the bulk of the laughs on stage though, filling out the roles of ancillary characters who bring an overflow of comic relief to the story of the gruesome murders on the moor. Mekjian and Moore have intense chemistry side-by-side; together they are somewhat reminiscent of the play between Stan Laurel and Oliver Hardy.

Wilder is a truly gifted theatrical persona; by the climax of the second act his talent for jumping from role to role builds into a rowdy joke that the audience couldn't get enough of. He's bold, electric, and best of all funny in roles like Henry Baskerville, the Texan with a goofy heart, and Inspector Lestrade, the copper with a twisted tongue.

Roate and Wilder are the Melodrama newbies, and watching them jump into the rhythm and pace of their raucous shows was a nice treat. Director Michael Jenkinson seems to trust the material but knows his actors are the ones carrying the audience through some of the staler jokes and lines.

Don't forget to stick around for the HGTVaudeville revue, which is another example of the cast's diversity and love for the kind of classic theater that built the foundation for the core of the Melodrama's work.

Baskerville, which runs through March 4, is a prime example of the Melodrama's keen ability to match projects with the best talent. It's the actors who carry this production, proving yet again that the little theater in Oceano knows how to pick 'em. Δ

Sun Arts and Lifestyle Writer Rebecca Rose would like to remind theatergoers once again to please be quiet and respect the actors. Contact her at rrose@santamariasun.com.