Great American Melodrama stirs up laughs with 'The 39 Steps'

The new year is still fresh, and after a short holiday break, the Great American Melodrama is back at it again, this time with a small-cast comedy of espionage and intrigue, The 39 Steps.

The story has quite a history, though not always as a comedic melodrama. The story comes from a novel by John Buchan, which was later adapted to the silver screen by Alfred Hitchcock in 1935. The original concept of turning the tale of intrigue into a comedic melodrama comes thanks to Simon Corble and Nobby Dimon, who arranged the story to be played by four actors. Patrick Barlow updated the story in 2005, providing the playfully rollicking adventure the Melodrama performs through the first week of March. 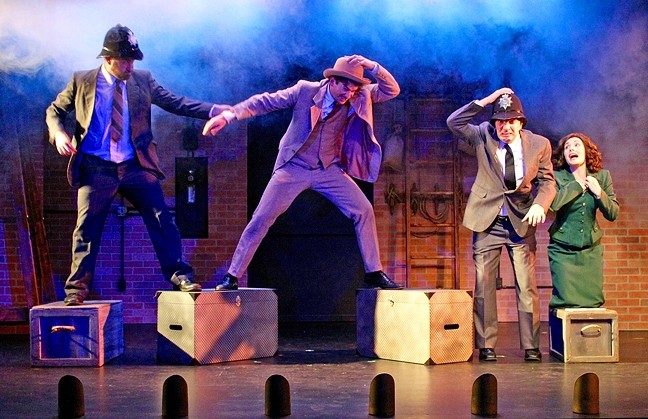 The 39 Steps opens on Richard Hannay, a Londoner just returned from Canada, who explains what a bore his life is. It’s a poignant bit of foreshadowing, as his life is about to become anything but boring. Jeff Salsbury, a returning Melodrama actor, plays the part well, from his hilarious moments of shock, to tongue-in-cheek vanity once his character is the subject of a manhunt, including descriptions of his appearance.

Lucky for Salsbury, he gets to stay in this character throughout the whole show, as the main subject, but his colleagues aren’t so fortunate. Familiar faces Billy Breed and Katie Worley, along with newcomer to the Melodrama Travis Mitchell, are stuck with the incredible task of portraying dozens of characters, which they more than aptly achieve.

The perpetually bored character Hannay goes to a variety show at the London Palladium, and watches a type of performance lost to us since the death of variety shows, an inveterate memorizer called Mr. Memory (Mitchell). During the performance, a gun shot rings out in the hall, putting the crowd and performers into a panic, and Hannay literally runs into the mysterious Annabella (Worley), who convinces him to take her back to his flat. Once there, she spills the beans on a mystery she is hiding, regarding a shadowy organization known as “The 39 Steps.”

She warns Hannay that members of this group are masters of disguise, and anyone at any time could be a secret operative. This plays in fantastically well with the arrangement of the cast. Due to all the quick changes by mostly Breed and Mitchell, it isn’t always clear if the characters are just that, passing characters, or the disguised operatives of The 39 Steps. Before retiring to bed, Annabella tells Hannay that the answer to this mystery lies with someone living in a large house in Scotland, where the two will journey to in the morning.

But alas, poor Annabella doesn’t survive the night, as she staggers into the room with a knife in her back. In classic Hitchcock style, Hannay fearfully flees to Scotland to get to the bottom of things, simultaneously making himself the main murder suspect, which complicates his journey to Scotland as he becomes the talk of radio news updates and newspaper articles that describe him as “tolerably good looking, with wavy brown hair, and a pencil-thin mustache.”

The story accelerates as Hannay navigates train rides full of Bobbies, helplessly runs through the countryside, and of course stays a step ahead of the shadowy members of The 39 Steps. The Melodrama pulls plenty from its magic bag, including smoke effects, lighting tricks, quick changes, audio supplements, and more. Also, once the character finally makes it to Scotland, a number of hilarious Scottish accents and characters give plenty to chuckle at.

The evening closes with a vaudeville review per Great American Melodrama tradition, this time with board games as the theme. Penned in collaboration between Artistic Director Dan Schultz and Music Director Sarah Wussow, the vaudeville includes familiar tunes with satirical lyrics that opine on the perils of playing board games with friends and family, as well as funny skits that include visits from Mr. Monopoly, Cavity Sam from the game Operation, and others. Laughter and fun is never a roll of the dice at the Great American Melodrama though, which always provides a family friendly atmosphere and exciting show.