Co-writer Peter Farrelly (Dumb and Dumber, There's Something About Mary) directs this biopic about African-American pianist Don Shirley (Mahershala Ali), who hires working-class Italian-American bouncer Tony Lip (Viggo Mortensen) as his driver on a music tour of 1960s American South. Though they're very different people, they develop a warm and enduring friendship. (130 min.) 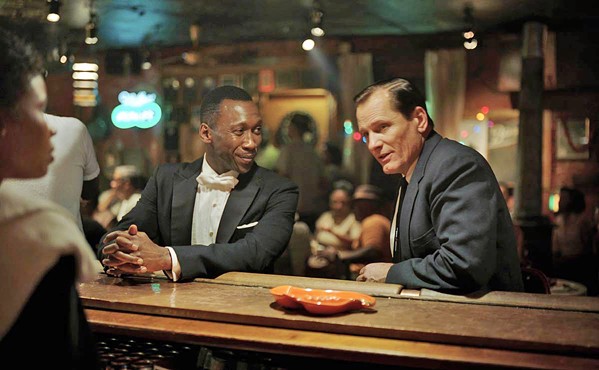 Glen This is one of those classic feel-good movies only a true cynic could reject. Both lead characters come out of the other side of the story improved. Ignorance drives racism and classism in equal measures, and Tony's culturally based racism crashes headlong into Don's elitist classism, forcing both of them to grow and expand their minds. We see Tony's racism not only in his uses of pejoratives such as "eggplant" to describe black people, but also in his actions. He's not the type to call a black person a name to his face or to physically assault one, but when his wife serves two black plumbers glasses of water after they finish a job at his apartment, Tony takes the glasses his wife left in the sink to wash and throws them in the trash. Likewise, we witness Don's elitism in his inherent sense of superiority. When he's interviewing for drivers in his apartment (above Carnegie Hall, no less), he sits before his potential employee on an elevated throne. His imperial comport—head raised high, posture perfect—signals to those around him that he is regal and they're underlings. Tony, in need of a job and with Christmas approaching, reluctantly agrees to work for Don, and along the way they learn to look past their initial judgments of one another and truly see the other's worth as a man. In fact, their very different interpretations of manhood also transform over the course of the story. I couldn't help but grow to like them both, even though they couldn't be more different. I liked them even more at the ends of their respective character arcs.

Anna The two characters are definitely a classic paradigm of street smarts versus intelligence. While Tony is no dummy, he relies a lot more on his physical presence to defend his side of an argument. Don is an intelligent, educated, and exceedingly precise man who is not charmed by Tony when the two first meet. However, Tony's reputation precedes him as an effective but somewhat reasonable guard against trouble. Taking on the role as Don's driver has one major drawback—he has to leave his wife and two young kids for a couple of months, something his wife, Dolores (Linda Cardellini), is less than keen on at first. She finally concedes to the journey, with two requirements—that Tony return before Christmas Day and that he write to her every chance he gets, a task the less-than-poetic Tony agrees to begrudgingly. The on-the-road moments, both big and small, between Don and Tony are what really form the frame of their unlikely friendship—delicious moments in the film that are sweet and insignificant or difficult and life changing. When Don gets curious over a letter Tony's writing, he soon volunteers his own much more eloquent words to make Dolores swoon. When Tony spots a KFC actually in Kentucky, he is gobsmacked that Don has never tried fried chicken; sweeping ignorance like the line, "You people love this stuff!" tumbles from his mouth without a second thought. Don struggles with his own demons as well, and Tony is called to save his behind time and again when the deep South proves to be sinisterly unwelcoming to the bespoke dressed black man rolling through their establishments. I love that this was based on a true friendship. It makes the film just that much more touching and relevant.

Glen The performances also help the film shine, and I wouldn't be at all surprised to see one or both men nominated for Best Actor. Mortensen has proven himself a chameleon, who in my book became a star under director David Cronenberg in A History of Violence and Eastern Promises. Appaloosa, The Road, Captain Fantastic; he's got an amazing range. He packed on a lot of weight to play Tony, a voracious eater with a thick accent. He's twice been nominated for a Best Actor Oscar. Maybe this is his year. Ali's breakout performance was in 2016's Moonlight, for which he won Best Actor in a Supporting Role, but he's been amazing in The Place Beyond the Pines and Free State of Jones. You're really seeing two master actors at the top of their game, and they have a wonderful chemistry between them. Tony's son, Nick Vallelonga, is one of the screenwriters, and in the closing credits you see photos of the real-life Tony and Don, who remained lifelong friends after the tour. Of course, a lot of the film examines the Jim Crow South and the whole idea of "traveling while black." The film's title refers to a publication called The Negro Motorist Green Book, which gave black travelers lists of establishments—mainly restaurants and hotels—that would serve black clients. There were actually "sundowner towns" in the South where black people were subject to arrest if they were within city limits after sunset. What a sad time in American history, but thank God for films like this to remind us of our past. It only skims the surface of 1960s race problems, but, more importantly, it tells a poignant and uplifting story that suggests we can do better.

Anna You are spot on regarding these performances—both Ali and Mortensen are beyond fantastic in their roles, as they have been in so many films. This film is both a spotlight and a subtle reminder as to how meticulous these two are at their craft. The abuse Don is subjected to is painful to watch in that way only truth can be. This was our country not so very long ago, and the streak of racism and hate continues to this day. Despite his rather brutish ways, when Tony is called to the YMCA after Don and another man are discovered together in a sexual situation, Don expects his travelling companion to be disgusted by him. Instead Tony simply shrugs and says, "I've worked in New York night clubs for years. I know that the world is ... complicated." Despite each of the characters preconceived notions of one another, the long journey through the South leaves them with a bond that only comes from times of both joy and sadness. Mortensen and Ali do this script and these characters proud. It's one to catch on the big screen and feel the magic of the movies wash right over your soul. Δ