Replacing fossil fuel with solar and wind isn't going well in Germany, so why would it work here?

Wow! The Democratic Party is taking on a new face: young ambitious faces, many of them women and persons of color, arrayed in new ideas, grand plans, and endowed with a passionate intensity, inspiring a hope we haven't seen since the early Obama days. (Whatever happened to that anyway?) Some of the recently elected congresspersons, their benches in Congress barely warm, flush with recent election victories, are already lining up for a shot at the White House, blithely undeterred by a rampant lack of experience. Yet their zeal is understandable: If someone like Trump could get elected, then anyone can ... except Hillary, of course.

However, one of their grand plans, the "Green New Deal," is not really new. It's a reiteration of a Democratic Party energy policy, long entrenched here in California, which consists of placing an unrealistic faith in the potential of "renewables" to solve our climate problem. This policy was to some degree inspired by the German Energiewende experience, where the Germans shut down half of their nuclear plants, threw tons of money at renewables like wind and solar, and then sat back to watch their greenhouse gas emissions plunge. It hasn't happened yet. The Germans are still the biggest carbon emitters in Europe—and possibly the biggest fools—but we can't really complain about it since we are the biggest per-capita carbon emitters in the world, emitting about twice as much as the Germans do. So we definitely have some room for improvement in both departments.

The other factor in the entrenched energy policy of the Democratic policy is a devout anti-nuclear power bias. The "Green New Deal" conspicuously omits any mention of nuclear power even though it has proven to be the safest, non-carbon-emitting source of electrical power in the world. The reason for this is simple: Being anti-nuclear is the Democratic Party's quo for the energy lobbyists' quid. This is clearly illustrated right here in California, where we have a Legislature so awash in contributions from energy special interests (oil and gas, renewables, and electrical utilities) that our legislators will soon have to wear hip-waders to work. By a remarkable coincidence, these same energy special interests will all greatly benefit from the closing of Diablo Canyon and the banishment of nuclear power from our fair state. 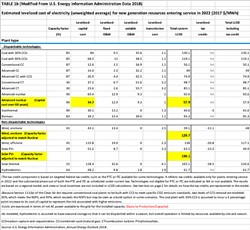 Meanwhile, the German Energiewende turned out to be an abysmal failure that can clearly be illustrated with a couple of well-established facts. Solar capacity in Germany in 2018 amounted to an amazing 22 percent of their total power production capacity, according to Clean Energy Wire. Yet, in 2018 solar only contributed to 7.5 percent of their total power production. In other words, more than two-thirds of their total solar capacity investment was wasted. In fact, the total contribution of solar to actual production was less than half of what would have been produced by the nuclear plants they shut down. Wind power fared better, but still performed at a fraction of its capacity. What made up the difference? Mostly coal with help from their remaining nuclear plants, which they still plan to shut down, and the coal guys can hardly wait. Some people never learn.

Now we are getting to the really amazing part. Believe it or not, our elected representatives, mostly Democrats, are trying to do the same thing right here in our little corner of the world. They are trying to force the closure of Diablo Canyon and attempt to replace its production with "clean renewable energy" sources that we know, based on the German experience, simply will not work. Not only that, our local, elected Democrat representatives are more dedicated to loyalty to their party's anti-nuclear line than to the interests of the community they are supposed to be serving and the environment they are mandated to protect. The Progressives are the worst, as they are unencumbered by any valid concept of reality and are therefore more open to delusions. As a result, our community is doomed to suffer severe social and economic consequences, yet they couldn't care less. We're just collateral damage resulting from the outdated, irrational, and inane anti-nuclear power policy of their political party. In the end, the only ones to benefit from the Diablo closure will be the natural gas utilities and their frackers, and renewable energy contractors.

Now don't get me wrong. I don't mean to pick on the Democrats, they just happen to be in charge in California. The only good thing I can say about Republicans is that they are less hypocritical. I was raised in a union family and I belonged to a union all my working life, and most of my life I voted Democrat. But when the Clintons sold the Democratic Party to Wall Street, I had no choice but to jump ship and become an independent voter. The Democrats talk a lot about change, but it is just talk. Behind closed doors it is all business as usual. After all, they have the same masters as the Republicans. I bet they still have the super-delegates that torpedoed Bernie Sanders, which is about as undemocratic as you can get. I am an equal-opportunity independent, in that I am equally disgusted by both major parties, and I am not alone as the number of independent voters in California is fast becoming greater than that of either major party. We shall become a force to be reckoned with because we've pretty much had it with business as usual. Personally, I think the best thing we could do is ban both major political parties from participating in all state and local elections. But somehow I don't think that the necessary legislation could ever make it through our Legislature. One can only hope. Δ

Mark Henry writes about energy from San Luis Obispo. Send comments through the editor at clanham@newtimesslo.com or write a response for publication and email it to letters@newtimesslo.com.