Greka Oil and Gas, the Santa Barbara County company that has worked to blame everyone from saboteurs to alarm companies for its recent string of oil spills, is now threatening a massive lawsuit against the county fire department for imposing conditions on the company. 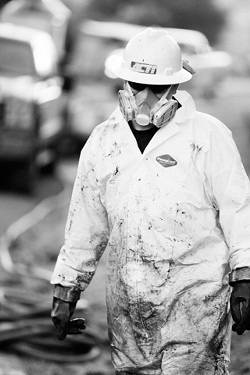 # Greka announced on Feb. 4 that, unless the fire department changes its "arbitrary, unreasonable, and subjective approach to dealing with Greka, the company will have no alternative but to pursue its legal rights ."

According to a company statement, if Greka decided to sue for damages, the amount would exceed $100 million.

"Basically the company has been shut down by these stop-work orders and the onerous conditions set by the fire department," said Robert Emmers, a spokesman for Greka.

The company has been under scrutiny since two recent major spills at its facilities, one in December and another in January. Since then, there have been other minor incidents reported at Greka facilities and a score of stop-work orders handed out by the fire department for a variety of alleged violations, including faulty equipment. Greka maintains that sabotage was behind the two large spills.

On Jan. 15, the Santa Barbara County Board of Supervisors held a hearing to address the company's spills and ponder how regulation might improve the company's track record. Since that hearing, four Greka-owned facilities have been shut down by the county.

"Flagrant violators will not be tolerated in Santa Barbara County. We will shut down any oil operator when their facilities fail to meet environmental and safety requirements," Santa Barbara County Board of Supervisors Chair Salud Carbajal said in a release.

"As far as I know, they have not filed a lawsuit," County Communications Director William Boyer said on the afternoon of Feb. 5. He said county officials had planned to meet with Greka officials on Feb. 6.

While Greka is concentrating on getting stop-work orders lifted, the Environmental Protection Agency (EPA) has issued an order for Greka's Bell Tank Facility, stating that Greka must work to clean up and contain oil released in a late-January spill at the facility and prevent further flow from causing additional harm to the environment or face fines of up to $32,500 per day for each violation. This is the second order issued by the EPA. The first was for Greka's Zaca-Davis facility.

The EPA is also looking into reports that Greka employees hadn't been following clean-up orders properly, according to EPA spokesperson Mary Simms. On Feb. 1, site coordinator Robert Wise said at a press conference that Coast Guard personnel and START (Superfund Technical Assessment and Response Team) contractors inspected the Bell Tank facility, just south of Santa Maria, and reported to him that they had witnessed Greka employees covering spilled oil with dirt rather than cleaning it up.

"I went out to the site with the Coast Guard and we got the misunderstanding straightened out," Tull said. "What they had told Mr. Wise was that we weren't cleaning the rocks well enough. Of course we will comply with whatever the EPA and the Coast Guard want us to do."

Greka has publicly blamed the most recent spill at the Bell Tank facility on the fire department's unwillingness to allow the company to drain the facility's upper pond so the company could fix an out-of-service pipe. During recent heavy rains, that pipe burst, and oil spilled into the creek near Palmer Road for a second time.