Aaron Schneider (Get Low) directs this World War II naval adventure written by star Tom Hanks and based on C.S. Forester's novel The Good Shepherd, about an inexperienced U.S. Navy captain, Cmdr. Ernest Krause, whose ship, Greyhound, is tasked with protecting an Allied convoy bringing desperately needed supplies from North America to Europe. As they move across the Atlantic out of range of air support, Krause must contend with a German U-boat wolf pack stalking the armada. (91 min.) 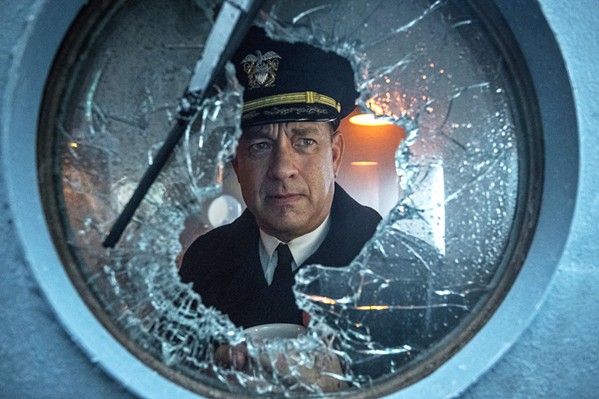 Glen This taut naval adventure is mostly a character study of Cmdr. Krause, in charge of the destroyer the USS Keeling, codenamed Greyhound. His ship, along with two British destroyers and a Canadian Flower Class corvette, are all that stand between the U-boats and 37 Allied ships traveling to Liverpool. Krause, a devout Christian and thoughtful tactician, has limited resources, and three days before they reach air support they encounter their first U-boat, soon followed by six more. Using ship-mounted guns, depth charges, and some clever maneuvering, Krause and his crew do their best to limit the damage against overwhelming odds. As the attack continues to unfold, Krause is faced with some impossible decisions, and we soon learn the measure of the man. Admittedly, this is a somewhat repetitive and claustrophobic story. They're stuck on a ship, after all, and most of the drama is confined to the ship's bridge and the commander barking commands to turn right, left, or fire the weapons, but at a brief 91 minutes, the action doesn't lag.

Anna There is a lot of rudder talk going on, but Hanks offers a compelling and magnetic performance as the man tasked with life-or-death decisions for himself and a large crew of men whose fates are in his hands. The responsibility weighs heavily on Krause; he is without sleep or food as he plugs on through the treacherous waters as German U-boats bite at his ankles every waking moment. Claustrophobic is right—you can practically feel each character's breath in the air in the tight quarters from which he commands. It's a pretty interesting camera device that tricks the mind without having to address the situation in dialogue. We also get a lot of shots from outside the window where Krause is peering through binoculars and a lone windshield wiper scrapes off seawater in constant repetition. It really was a visually interesting film, which made the lack of dialogue beyond shouting commands much more tolerable. It's more a story of the man and not the mission, and Hanks is his usual incredible self here.

Glen Frankly, after four months sheltering at home, I'm feeling pretty claustrophobic myself, not to mention starved for first-run movies. I'm really missing the theater! I'm not sure it would matter too much if this was on the big screen rather than at home. There are a lot of murky surging seas, gray skies, and ships bobbing in an endless oceanic void. I certainly think there are better naval films. Master and Commander (2003) comes immediately to mind, as does Das Boot (1981), The Cruel Sea (1952), and San Demetrio London (1943). All these aforementioned films bring attention to what's usually the least interesting form of combat. Ships at sea don't have the immediacy of ground or aerial fighting. There's just something slow and monotonous about sea battles. But if you're fascinated by the tactics and want to wallow in the dread of feeling like sitting ducks as U-boats shoot torpedoes at you, Greyhound is worth seeing. It's a film held together by Hanks, again in the role of the unremarkable everyman who once thrust into a trial by fire behaves with nobility, honor, and resolve. Whether it's his Capt. Miller of Saving Private Ryan (1998), his terrified titular turn in the modern-day pirate film Captain Phillips (2013), his FedEx exec turned survivor in Cast Away (2000), his portrayal of astronaut Jim Lovell in Apollo 13 (1995), his death row prison guard Paul Edgecomb in The Green Mile (1999), or his turn as airline pilot Sully Sullenberg in Sully (2016), Hanks delivers.

Anna I do love the foreboding nature that an unseen enemy immediately brings, and when your foe is just a blip on the sonar, the unknown is palpable. Krause is a devout man who never misses praying over a meal (even if he doesn't end up eating it) or mourning the souls lost in battle, no matter which side they may fall on. He's both pragmatic and sentimental, weighing the risks and possible outcomes of every move. Commanding yet approachable, he takes his leadership role deep into his heart. He's got a woman at home he hopes to marry (an underused Elisabeth Shue) and plenty of reasons to not go gonzo trying to thwart the enemy. As you said, there's no shortage of harrowing naval tales, and while this one may not be the cream of the crop, it was refreshing to see a full-scale new movie, even if we had to hunker down and watch from home. I'll always be down for a Tom Hanks flick, and this one gave me plenty of his mug on the screen and enough suspense to keep me intrigued. Δ