Marlene Uva has common variable immune deficiency, a disorder that impairs the immune system. Because she has a high risk of contracting coronavirus, she doesn't leave her house other than to visit her doctor.

Uva told New Times she receives donated transfused antibodies once a week and takes multiple medications in order for her immune system to function. She fills her prescription at the pharmacy inside her local Vons store on Tefft Street in Nipomo. Her son has volunteered to pick up her prescriptions for the time being. 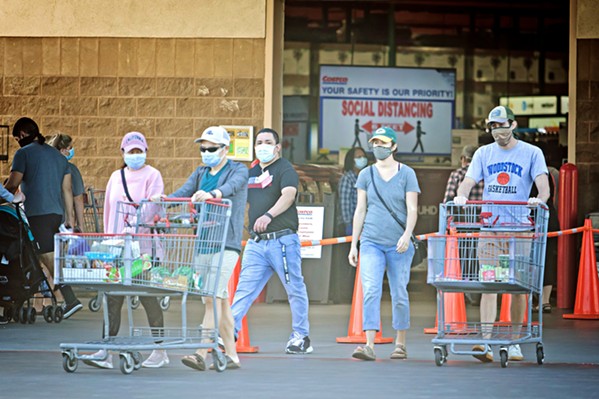 Uva said she called the corporation to file a complaint and got a call back from the store manager of her local Vons. Since her phone call, Uva said, her son still sees customers in the store without face coverings, so her call felt pointless.

"I'm not just calling out of concern for myself or my son but for other people that shop at that store and are trying to stay healthy," she said.

There isn't a federal mandate on face coverings, and guidance on the issue is unique to each state and county, so retailers are making their own policies. When customers don't adhere to those policies, store associates are left with the responsibility of enforcing them.

The face-mask policy for Vons, Pavilions, and their parent company, Albertsons, starts with having the health and safety of every customer as a top priority, according to Melissa Hill, director of public affairs and government relations for the company's Southern California division.

The policy includes stationing store associates at the front doors of the store to clean shopping carts and remind customers about the mask policy.

"They are asked to involve a manager when customers become confrontational and do not want to comply," Hill said.

The company acknowledges and respects that some customers, due to medical reasons, may not be able to wear a mask, Hill said, so it encourages those customers to consider an alternative option—like a face shield. At that point in the interaction, she said, the employee or store manager will offer to shop for the customer or let them know about the store's home delivery and "drive up and go" options.

"Associates are frustrated when customers do not wear a mask, as they are concerned for the health and safety of themselves and their customers," Hill said.

A video posted on social media in July showed a shopper at Smart & Final in Paso Robles refusing to wear a mask after an employee told him to wear one. He put the mask on and walked away only to take it off and continue shopping. The employee again reminded the man of the mask policy, stopped the shopper's cart, and told him he needed to leave.

A security guard intervened, and the customer left.

Smart & Final's policy is that the store manager is responsible for handling mask enforcement. A spokesperson for the company told New Times that in most cases the customer needs a simple reminder to wear a mask because they forgot.

"We have been requiring both our employees and our customers to wear masks since April, so this is something to which they are well accustomed. As city, county, and state governments have mandated masks, we have dealt with significantly less non-compliance overall," the spokesperson said. "The majority of our customers are grateful for our policy. Incidents with customers who refuse to comply are rare, but unfortunately, these situations attract a lot of attention."

The company doesn't keep specific statistics on noncompliance, but the spokesperson said the incidents have greatly diminished over time.

"The public's awareness and understanding that this is a proven way to prevent the spread of COVID-19 has been the key to compliance. While we are seeing a tipping point of acceptance nationally, we reached that level in California months ago," the spokesperson said.

"Workers serving customers should not have to make a critical decision as to whether they should risk exposure to infection or lose their jobs because a minority of people refuse to wear masks in order to help stop the spread of the deadly coronavirus," the statement read.

A local Smart & Final was recently sued for alleged discrimination over a face-mask mandate because the shopper refused to wear one due to health concerns. The lawyer representing the shopper, Dennis Balsamo, told New Times that he's received several calls from shoppers who claim they've had the same experience so he filed a class action lawsuit on Aug. 11 in SLO County Superior Court.

Currently, retailers are following the recommendations from the Centers for Disease Control and local public health officials to create their own policies.

In the letter, the group states that current local and state mandatory mask requirements vary widely in scope, application, and enforcement. In some locations, the mandate is imposed on businesses for them to enforce.

"Not only has this led to public confusion and lower levels of consumer confidence, but it has also contributed to confrontations between customers and employees and litigation from both directions—enforcing mask requirements and failing to enforce mask requirements," the letter states.

The letter asks national leaders to establish guidance on appropriate metrics (e.g. positive tests, hospitalizations) for imposing location-based mandatory mask requirements in all public spaces. It calls on the administration to develop model mandatory mask policies that are simple and don't impose the enforcement burden on organizations without such expertise, such as businesses and nonprofits. Lastly, the letter requests the administration make clear that businesses and nonprofits aren't liable for refusing entry or services to an individual who isn't complying with face-covering requirements.

When Uva called the corporate offices of Vons to complain about face-covering policies that weren't being followed, she also called San Luis Obispo County's enforcement line.

Uva said a recorded message plays, and you leave your complaint or concern.

"There's no call-back or anything, you just leave a message. I told them in my message, 'How do I know that you're enforcing anything?'" she said.

County spokesperson Michelle Shoresman said the county enforcement line was established around the beginning of the pandemic, and residents have been using it to report businesses that are not in compliance with the state and county emergency orders.

"Although, we currently only have state orders in place, that phone line still exists, and residents are welcome to call it with any complaints about businesses," Shoresman said. "When the county staff receives a complaint about a business within a city jurisdiction, they refer that complaint to the appropriate city for follow-up and possible warning, citation, etc., or to work with the business about how to improves compliance with the orders." Δ