by Chris McGuinness and Aidan McGloin

The city councils of Grover Beach and Arroyo Grande voted to appoint two women to fill seats left vacant in the wake of the November 2018 elections.

The Grover Beach council voted 3-1 on Jan. 7 to appoint attorney Desi Lance to fill its vacant spot, while the Arroyo Grande City Council voted 4-0 on Jan. 8 to appoint Planning Commissioner Lan George. Both councils voted on the appointments following public meetings where they interviewed multiple residents who applied for the spots. In both cases, the vacancies were created after sitting council members were elected mayor in the November elections. 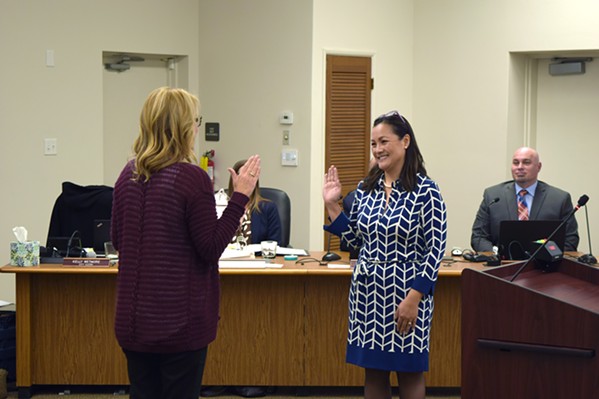 Lance, a contract business immigration attorney, was one of 10 qualified applicants vying for the spot in Grover Beach. Lance said she grew up in SLO and Paso Robles and left the area to go to college. She lived and worked in Chicago and London before moving back to the Central Coast with her family in April 2018.

"I am incredibly honored to serve Grover Beach in this capacity, and I look forward to immersing myself in this role," Lance told New Times.

Mayor Jeff Lee and Councilmembers Mariam Shah and Barbara Nicolls voted in favor of appointing Lance to the council. Councilmember Debbie Peterson voted against Lance, noting that she'd only been living in the city for a short period of time.

"It was just the length of time in the actual city that stopped me," Peterson said. "That was the only thing that stopped me because I think [Lance] is fabulous."

In addition to serving on the AG Planning Commission, George also works as a digital advertising consultant, podcaster, and business coach.

George was one of five residents vying for the open seat on the council. Fifty-five community members attended the meeting, five of which advocated for the council to appoint George due to her eight-month appointment with the Architecture Review Committee in 2014, four years with the Planning Commission, and stated ability to work under pressure.

"I am happy to have been appointed," George said. "I look forward to working with this city and growing our community. I appreciate the City Council having faith and trust in me to do what is best for these citizens." Δ