From maps created with basic coding to those "even drawn on a napkin," Grover Beach wants residents to help with its historic districting debut. 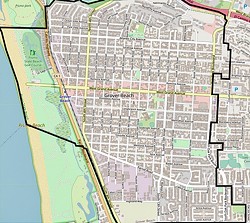 "While we might be experts in the district formation process, you are ultimately the experts in Grover Beach. The law is really designed to make sure communities of interest are held in high regard during the map-drawing process when we form districts," Ryder Smith, president of Tripepi Smith, said at Grover Beach's Oct. 27 district map workshop. "We don't want to cut up communities of interest. We want to preserve those."

The beach city made the decision to create district lines after attorney Jeffrey Mayes notified them on behalf of resident Felipe Rueff, who alleged that the city's at-large election system could violate the California Voting Rights Act because underrepresented communities had a tough time electing their candidates of choice.

"Creating council districts is intended to make running for a council seat more accessible for residents by having a smaller geographic area to campaign in and represent. Each of the four districts will represent approximately 3,200 residents so a council member elected by district could more closely represent specific areas and communities of interest," Bronson said.

Among other rules and guidelines for map-building, NDC consultant Daniel Phillips told residents that district lines cannot be drawn in favor of any political party and should not result in racial gerrymandering.

The deadline for draft maps is Jan. 6, 2022. City officials said they will be available on Grover Beach's districting website. The City Council aims to adopt the final map on March 14, 2022. Bronson told New Times it would be implemented at the start of the November 2022 election season.

"The council considered forming a separate commission comprised of residents to create a district map, but such a body is not common for small jurisdictions, which generally keep this decision with the City Council," Bronson said.

Residents can create Grover Beach maps using digital building tools that NDC often uses, such as DistrictR, Story Map, and Interactive Review Map. Paper-only maps are also encouraged. These resources are available on the districting website, and residents can send them to districting@groverbeach.org or drop off maps at City Hall.

"This is an esoteric project; you're only going to do this once, likely. In about 10 years from now, there'll be a census that'll prompt you to redistrict at that time and rebalance the population among the districts that are formed," Smith said. Δ