There are three city council seats up for election in Grover Beach this year, and 10 candidates are competing for the spots.

Longtime Grover Beach resident and court reporter Elizabeth Doukas is gunning for incumbent Mayor Jeff Lee's seat, and she hopes to bring a different set of values to the council. Doukas, who has unsuccessfully campaigned for a City Council seat many times since 2006, has been heavily involved in Grover Beach politics for years.

She's a founding member of the Rotary Club of the Five Cities and the Eco Club Five Cities, which regularly hosts trash cleanups and zero-waste events. She's the secretary at her local church and sits on the city's Traffic and Noise Group Committee.

So Doukas said she knows how the city operates, and she doesn't like what she sees. Community members are desperate for major street repairs, she said, "and not just during the election year." They want to know why there isn't funding for streets when Grover Beach voters passed a bond measure specifically geared toward street repairs in 2014 and allowed recreational marijuana sales in the area.

"So everyone wants to know: Where is our money going?" Doukas told New Times.

Doukas said the city needs to be transparent and open about where it's putting it's money. It needs to listen to what the people want and follow through on promised projects—without asking residents for more help through increased taxes.

"So my goal would be to create a budget in which we don't take any more money from these citizens," she said. "Listen: They've given us enough."

But Mayor Lee said that since he was first elected to City Council in 2012, and even in his time as mayor since 2018, Grover Beach has made significant strides in both community outreach and collaboration and street repairs.

The condition of Grover Beach's streets has been an issue since Lee moved to town in 2001. There's never much funding available for major street repairs, but since the passage of Measure K-14, progress has been made, Lee said.

"We're actually ahead of schedule," he said, although he said he's aware that many residents would like to see things moving faster.

City Council, he said, is always working to get residents as involved as possible, especially now, when the COVID-19 pandemic has left so many struggling and feeling isolated. When the coronavirus hit locally, Lee said City Council was quick to offer grants to struggling businesses, outdoor dining options for restaurants, and launched social media campaigns aimed at bringing the community together virtually.

Lee said he'd like to continue that work and do more to help the city fully recover post-pandemic. He wants residents to be a part of that process, too.

"The more we can get the community involved," he said, "the better the city would be."

Electrical contractor and 15-year Grover Beach resident Robert Robert is running on a similar platform to Doukas, but he's vying to fill a two-year term left by Barbara Nicolls, who was elected in 2018 for a four-year term but retired on June 30 due to health issues. Robert also helped start the Eco Club, he's been on the ExplorationStation's board for about seven years, and he sits on the city's sales tax board.

Even at his level of involvement with city government, Robert said he's not entirely sure what the city is using its sales tax and bond revenue on. He hopes to change that, and make it easier for citizens to get involved and get answers to their questions. 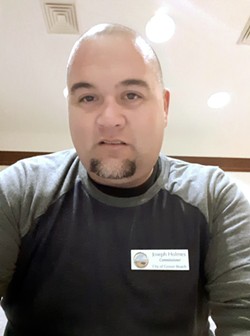 Joseph Holmes is one of many candidates hoping to snag incumbent City Councilmember Karen Bright's seat this year, and as a near lifelong resident of Grover Beach, Holmes said he knows the people of Grover Beach and what they want: safer streets for both pedestrians and drivers, affordable housing, and a bustling local downtown economy.

Holmes said he's been active in Grover Beach city politics for about the last 14 years, and currently serves on the Parks and Rec Beautification Commission. There are ongoing street repairs, he said, but he wants to see more progress in pedestrian safety efforts—lights at intersections, the implementation of crosswalks, the construction of sidewalks on busy streets—and faster.

If Grover Beach is more walkable, Holmes said it could lead to more business for the shops on Grand Avenue, where he hopes to see a true downtown develop.

"I want to see things booming downtown," he said.

But first Grover has to make it through COVID-19, and as a father of two young children and a restaurant worker who was recently laid off due to the pandemic, Holmes said he knows what real residents are going through right now, and he'd like to help however possible. 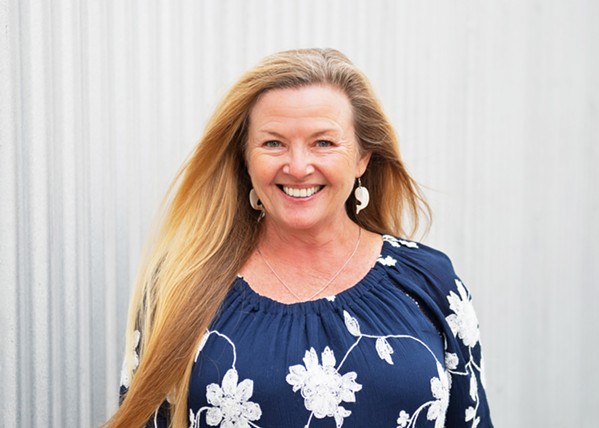 But incumbent Karen Bright said she already has experience helping Grover Beach residents through a pandemic—she's doing it right now.

Bright was appointed to her current position in March 2019, but she's served on City Council many times before. There are a lot of great people running this year, but Bright said many of them don't have prior experience with city government. With the city and nation in the middle of a pandemic and economic downturn, she feels it would be best to go with someone who knows what she's doing.

"I think things that have been going really well in spite of the COVID-19 issues, the fact that we have been able to assist our businesses and helping them with the microgrants and that sort of thing," Bright told New Times. "Helping them keep their businesses open. We're doing all we can with that."

City Council is also working closely with the 5 Cities Homeless Coalition to get those struggling with housing help as quickly as possible, and Grover Beach is working with day care centers to offer scholarships to families in need.

Streets are always a priority, and Bright said in her 33 years as a Grover Beach resident, essentially every person who has run for City Council says they'll fix the streets. Then when they're elected, they realize it's not that simple.

So Bright wants to continue focusing on getting through the pandemic, preventing an increase in homelessness, and improving the police and fire departments, much of what she said City Council is already doing.

"Even though we have the smallest general fund in the county," she said, "we are able to use our grant funds in a way that is able to assist our residents in the best way that we can."