In an attempt to cover a more than $1 million shortfall in this year’s operating budget, the San Luis Obispo Superior Court plans to close its Grover Beach location. 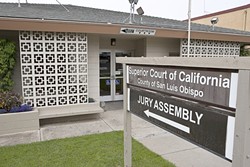 Beginning Jan. 3, 2012, the courthouse at 214 South 16th St. in Grover Beach will close indefinitely, though court officials say they’ll aggressively seek to restore the location at the end of the fiscal year.

According to Court Executive Officer Susan Matherly, “major savings” will be achieved through consolidation of SLO and Grover Beach resources, and the court will also trim utilities, maintenance, and security expenses.

Matherly said no jobs will be lost in the move, and the eight employees currently assigned to the Grover Beach location will be reassigned to the courthouse in SLO.

All Grover Beach cases will now be heard at the central courthouse. And all pending cases previously accepted at the Grover Beach location will be transferred to the SLO location.

The Grover Beach courthouse currently handles traffic, criminal, small claims, civil, and family law matters, including court and jury trials. Matherly said the building, which is owned by the state, will literally be empty for at least the remainder of the 2011-12 fiscal year, but noted that court staff hopes to have it back in operation by the time officials find a replacement for retiring Superior Court Judge Teresa Estrada-Mullaney.

Other court services will also be affected. Officials announced that the court will implement mandatory furloughs for all employees every Friday beginning Oct. 7, as the court looks to shave approximately $800,000 in salary expenses from its budget.

Matherly advised people to make payments, inquiries, or other transactions on the court’s website or through its Interactive Voice Response system at 781-5143.