Arroyo Grande resident Ben Oakley acknowledged that neighborhood opposition to plans for a new homeless services facility on the city's northeastern border in Grover Beach got off on a bit of a frenzied and emotional foot.

"At first, we were really worried and caught off guard," Oakley explained. "We felt very disenfranchised. We felt there was a lack of transparency in what was happening. I think a lot of that tenor has subsided somewhat." 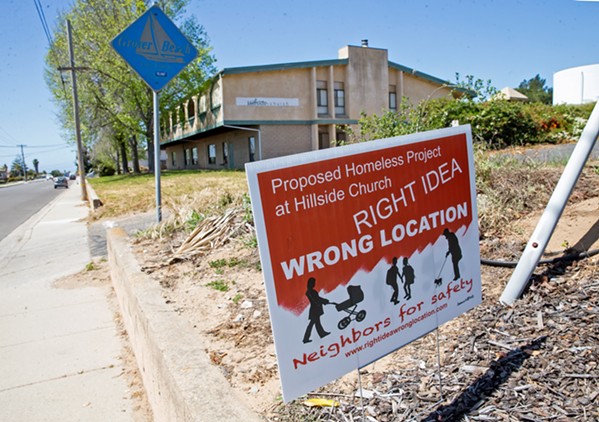 While perhaps more cool-headed now, many neighbors' opinions about the proposal haven't moved an inch. Their slogan is "right idea, wrong location," and it's plastered on yard signs at residences surrounding Hillside Church on Newport Avenue.

The 5 Cities Homeless Coalition (5CHC) is in escrow to buy the church property, which, in partnership with Peoples' Self-Help Housing, it hopes to refurbish and develop into administrative offices, a transitional housing center for homeless youth (ages 18 to 24), and 20 units of permanent affordable housing.

Neighboring residents say they're in favor of the concept but feel the location—in a single-family residential zone in close proximity to schools—is inappropriate and could pose a public safety risk. Neighbors also say they felt blindsided by the plans, which came following two winters where the Hillside Church was used as a winter warming center without many residents' knowledge, Oakley said.

As word trickled out in late February about 5CHC's intent to buy and develop the site—and that the area city councils had given their conceptual support for it—the neighborhood went on the defensive.

"Right about the same time we heard about the warming center, there was a hearing at the Grover City Council regarding this big proposed expansion, and it all clicked," Oakley said.

After several emotional city and county public meetings in March and early April, both Oakley and the project's backers said they're now focused on talking and finding common ground.

While neighbors scour the real estate market for other properties that could suit the project, Peoples' Self-Help Housing CEO John Fowler said he wants to open an "honest" dialogue with the community where everything can be discussed. Both sides agreed that more communication and information sharing is needed.

"Our job is to do as much community outreach to the people and see if we can change some hearts and minds, and do something that becomes a win-win situation for everybody," Fowler told New Times. "We're most interested in continuing to have dialogue with people. If there's another viable site, we'd love to chat with them. It's not the site, it's the need. We need to make sure the needs and the services in that community are addressed."

For now, though, all signs point toward the project moving forward as it was planned. On April 4, the San Luis Obispo County Homeless Services Oversight Council recommended a $2.6 million allocation of new state grants to support the Hillside project.

The grant funds, contingent on an April 23 Board of Supervisors' vote, are critical to help pay for property acquisition. After that, 5CHC and Peoples' Self-Help Housing would submit a formal application to the city for the project.

As far as changing course, Laurel Weir, head of homeless services at SLO County, said the grant funds may have some flexibility in terms of project location. But per state rules, they must all be spent by June 2021.

Facing a time crunch, stakeholders from both sides hope that cooler heads can prevail, and that a mutual solution can be reached in time.

"We don't want to block the [grant] funding," Oakley said, "but it's going to require some of our city leaders and elected officials to come up with an alternative quickly. I think we're going to be successful."

"I think everybody wants to solve this," Fowler added. "I'm optimistic we can." Δ