Grover Beach police continue to investigate just who is responsible for placing and detonating "destructive devices" in one area of the city. They are asking the public to help them find a person of interest in connection with the case.

According to police department officials, the investigation began after they discovered two devices placed at two different locations on Feb. 1, one on the 900 block of Ramona Avenue and another on the 100 block of South 9th Street. 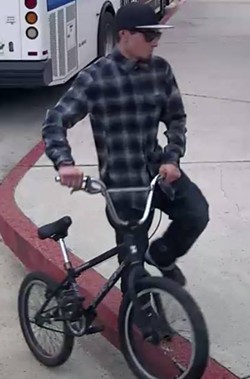 No injuries or property damage resulted from the detonations. Miller declined to give a more specific description of the devices, but indicated that their potential to harm or injure anyone was minimal.

"Any explosive device can injure someone, but these didn't represent a huge threat," he said.

The investigation into the devices also included the Five Cities Fire Authority, the San Luis Obispo County HAZMAT team, and the FBI.

On Feb. 26, the department released a photo of an individual they believe is a person of interest in the case. The department did not release a name, but provided a photo of a white male wearing a hat, sunglasses, and carrying a bicycle.