Longtime Grover Beach resident and court reporter Elizabeth Doukas is competing with incumbent Mayor Jeff Lee in this year's November election, but the candidate is also facing a battle in SLO County Superior Court, where she's fighting three criminal misdemeanor charges in incidents that appear to be related to a years-long dispute with her neighbors. 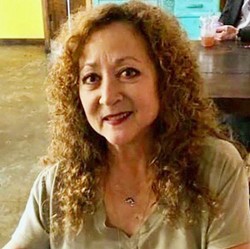 On April 17, District Attorney Dan Dow filed three misdemeanor charges against Doukas—one count of public nuisance and two counts of disturbing the peace by loud noise—in a January incident in which Dow claims Doukas "did willfully, unlawfully, and maliciously disturb another person, to wit, H.L. by loud and unreasonable noise."

Although Assistant District Attorney Eric Dobroth declined to comment further on the case, court records going back to 2015 and dozens of calls for service to the Grover Beach Police Department from the past two years suggest the charges are related to an ongoing dispute between Doukas and her neighbors Holly and Cinnamon Lindroth.

The Lindroths and Doukas have been in an all-out battle since at least July 2015, when the Lindroths applied for a civil harassment restraining order against Doukas, claiming that Doukas was obsessed with what she alleges are various code violations on the Lindroths' property. According to the restraining order application filed by Holly, Doukas took issue with a number of the property's attributes—the color of the house was too "glaring," the outdoor porch light prevented her from seeing the stars—but was at the time mainly concerned with an outdoor staircase leading to the Lindroths' top floor.

When the Lindroths informed Doukas that they weren't aware the structure was illegal and didn't have the money to enclose the staircase as Doukas requested, they claim Doukas became aggressive, repeatedly threatening to sue them, yelling over the fence at them, and taking photos of them in their yard.

The Lindroths provided the court with an August 2012 letter written to Doukas by former Grover Beach City Attorney Martin Koczanowicz, who said that while there was unpermitted work being done on the stairs in 2011, the owner stopped and obtained a permit before continuing. Koczanowicz forwarded the same letter to Doukas again in 2015, reiterating that the stairs and other features of the property do not violate Grover Beach's codes.

"The city is not aware of any current code violations on the property," he wrote, "as the areas of your concerns are not a violation of the code."

A judge denied the Lindroths' 2015 request for a restraining order and ordered Holly to reimburse Doukas' $435 filing fees. The judge also denied Doukas' request for reimbursement of thousands of dollars worth of attorney's fees.

"In short, although [Lindroth] failed to meet her burden of proof by clear and convincing evidence," the judge wrote in October 2015, "[Doukas] certainly contributed to the situation."

According to police records from Jan. 28, police made contact with Doukas, and she informed them that she had recently installed a security device that chirps every time it senses movement in her yard. Police allegedly advised her of the noise concerns, but officers continued to receive reports of chirping sounds until Feb. 8.

Although Doukas mostly declined to comment on the case, she said the misdemeanor charges are all related to a "malfunctioning" security camera she put in her yard for her own safety while replacing a fence for a few days. The chirping should amount to an infraction at best, she said, and she questioned the true reasons for such charges.

"It is simply political persecution of a candidate seeking reform," she wrote in a text to New Times.

Matt Hanley, Doukas' attorney, wouldn't comment on what he called the irrelevant civil dispute between Doukas and her neighbors. But he confirmed that the three criminal charges she's currently facing are all related to the chirping sounds alleged to have come from her property and that those charges are extreme.

"I think it's unfortunate that this is what it's come to," Hanley told New Times.

Doukas, he said, pleaded not guilty to all three charges.

"I do feel as though the charges are unsubstantiated," he said. "We are really looking forward to having our day in court." Δ