Grover Beach whittled down its gallery of potential City Council district maps to four hopefuls that will receive close consideration late next month.

Of the total 45 draft maps the city accumulated from the assisting National Demographics Corporation (NDC) and the public, 17 plans weren't eligible, in part because many were drawn using projected census data that differed substantially from the official final counts. 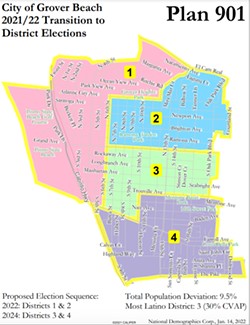 "Everyone who drew a map with the estimated data drew maps that weren't legally compliant because the districts are not population-balanced," said NDC consultant Daniel Phillips at the Jan. 24 Grover Beach City Council meeting. "Because of the delay in the census data, we were not able to have the official data when the DistrictR [mapping] tool was launched. So we put estimated data on the website and hoped that that would be close enough to the actual official data. That did not turn out to be the case, unfortunately."

Deciding on a district map is imperative for Grover Beach. Compelled by a legal notice filed by attorney Jeffrey Mayes on behalf of resident Felipe Rueff, the city has to switch from its at-large election system to a district-based one. Rueff alleged that the existing system could violate the California Voting Rights Act because underrepresented communities found it difficult to elect their chosen candidates.

The Jan. 24 meeting was the council's first since residents turned in their draft maps based on a series of public workshops conducted in 2021. The city selected four maps created by the NDC that were compliant with federal and state criteria. Some of the requirements include equal population distribution across districts, no racial gerrymandering, and having easily identifiable boundaries.

At the meeting, Phillips said that the NDC maps were made to reflect some public preferences as well, such as honoring the "communities of interest" that the City Council identified last summer. Renter-occupied housing, school attendance areas, and high-density commercial areas make up some of Grover Beach's communities of interest.

Phillips also highlighted another focus group: the Latino Citizen Voting Age Population. According to him, Latino residents make up the largest community in Grover Beach after white people.

"We're focusing on that population because when it comes to following the federal Voting Rights Act, we want to really be mindful of those who are eligible to vote, have the ability to vote, and enhancing the opportunity to elect candidates of their choice. We're also focusing on the Latino population because when it comes to the federal Voting Rights Act's concern with protected classes, those who are historically marginalized or disadvantaged, often are racial or ethnic minority groups," Phillips said.

Ultimately, the city chose NDC maps 901, 904, and 905. Two versions of map 901 will be considered along with the others at a Feb. 28 public hearing meeting. City Council members wished to reduce the population deviation of map 901 because it was toeing the 10 percent threshold beyond which it becomes ineligible.

"Since we do not track which individuals submitted maps, we cannot be sure those people did not resubmit after census data was available. Further, many maps, while not viable or compliant as a district map, served to provide input regarding communities of interest. The city continues to welcome public input for the council's consideration ahead of the final map selection hearing on Feb. 28," she said. "Any new maps will be shared with the council along with other public input ahead of the hearing, and they may choose to further consider one or more additional maps as finalist maps at their discretion." Δ