Grover Beach residents can expect to see a lot of changes at Ramona Garden Park in the coming years, including the demolition of a gazebo that some homeless residents use for overnight shelter. 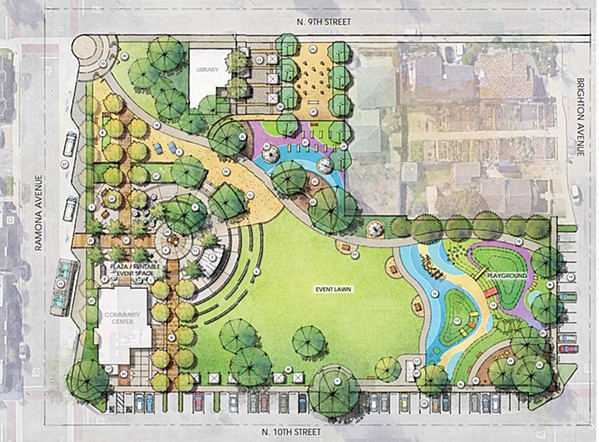 At a meeting on March 22, Grover Beach City Council approved the city's capital improvement program for fiscal years 2022-26, a plan that outlines a schedule for expenditures and projects estimated to cost $50,000 or more that could be completed in the next four years. The plan includes roughly 22 projects proposed for fiscal year 2022, including improvements to the police station, City Hall, street and storm drain maintenance, and water main upgrades.

There are also roughly $512,000 worth of updates coming to various Grover Beach parks in fiscal year 2022, including the first steps of a renovation of Ramona Garden Park. While Ramona Park is often used as a hub for city events, music festivals, and holiday celebrations, its public restrooms and gazebo make the park popular among some homeless residents.

"The plans look amazing and I would love to see this place filled with families from the neighborhood," resident Savanna Ford wrote in an email to City Council in the fall of 2020, when the city approved its master plan for park restorations. "However, this park is not a safe place to take kids. Please remove all the drug addicts and homeless people who live there."

In the last month, rumors that Ramona Park could become a designated campground for individuals experiencing homelessness have spread among South County residents on social media, along with concerns about what some say is an increasing prevalence of homeless camps at the park. City Manager Matt Bronson denied those claims, but he said that the city often receives complaints about homeless individuals camped near the gazebo.

The city is limited in what it can do to address homeless camps, Bronson said, because there aren't any homeless shelters in the Five Cities area.

"There never has been," he told New Times. "There needs to be."

In 2018, the U.S. Ninth Circuit Court of Appeals ruled in Martin v. Boise that ordinances prohibiting sleeping or camping on public property can't be enforced in localities without meaningful alternatives, such as shelter space or designated campsites. In April 2020, the Centers for Disease Control (CDC) also issued guidance discouraging the dispersal of homeless camps during the COVID-19 pandemic.

Bronson said Grover Beach can't legally prohibit residents from sleeping in the park at this time. But when the city drafted its Ramona Park master plan in 2019 and 2020, residents who attended outreach events and completed a city survey said they considered homeless camps and drug use at the park priority problems in need of addressing.

So Grover Beach plans to demolish the gazebo, which Bronson said doesn't get much use anyway, to make way for a fitness space and outdoor classroom-event space hybrid. New bathrooms will be installed near 10th Street, along with a playground, plaza, and an expanded amphitheater.

There's no clear timeline for the updates just yet, but Bronson said construction documents for the Ramona Park project will be developed in fiscal year 2021-22. Bronson said the city is working with the 5Cities Homeless coalition to ensure that the houseless people camping in Ramona Park are connected to services. It's never easy, he said, to balance the needs of those experiencing homelessness with the needs and concerns of the public at large.

"Homelessness is the most difficult public policy issue that we face as a community," he said.

Janna Nichols, executive director of the 5Cities Homeless Coalition, said local homeless people have long camped out at Ramona Park and on other public property throughout South County, and without shelter space nearby, it has always been a complicated problem.

Finding adequate land or facility space is often difficult, as is appeasing neighbor concerns. Although the 5Cities Homeless Coalition does have a warming center, Nichols said even that has had to move locations five times in the last five years.

"Regardless, the closest shelter is 20 miles away," she told New Times. "That is problematic for lots of reasons."

Without a shelter, 5Cities Homeless Coalition staff do both outreach and case management work largely in the field. That makes it harder to keep tabs on clients, Nichols said, harder to build trust, and harder to get people in need to focus on things like treatment, jobs, and housing, when all they can think about is where they're going to sleep at night.

At the beginning of the pandemic, the 5Cities Homeless Coalition used 10 campsites at the Coastal Dunes RV Park and Campground as shelter space for a few homeless individuals and families. Nichols said seven of them found housing within two months. That pilot project was so successful, Nichols said, because of the case management consistency offered with even limited shelter.

While Nichols said she understands the community's concerns regarding encampments at Ramona Park, she wonders where else those people are supposed to go.