The Grover Beach City Council joined neighboring cities Arroyo Grande and Oceano in a conversation about how to fund their joint fire department at its March 19 meeting. 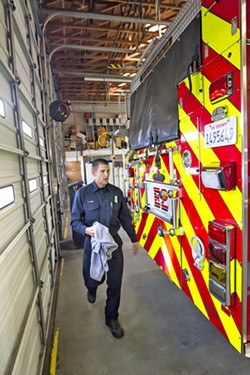 It's a transition that would cost. Grover Beach spent $1.4 million on fire for the 2017-18 fiscal year, Arroyo Grande chipped in $2 million, and Oceano put up $808,530. To maintain current fire and emergency services, it's estimated that Grover Beach's costs would increase by $200,000. That doesn't include an additional $100,000 cost that could come if Five Cities Fire transitions to full-time firefighters.

"I'm trying to provide consistent [service] levels to our communities because I live here as well," Lieberman said. "I'm paying the rate as well."

The meeting ended with council directing staff to prepare a budget that provides the $300,000 necessary to move forward with the proposed plan and work with partner agencies to modify the joint powers agreement as needed.

In order for Five Cities Fire to move forward with the transition, it must have a unanimous vote from all three communities.

"If we are unable to get a unanimous vote on the budget, then we give staff direction to work with the chief and legal counsel to identify if there's opportunities for sidebar agreements to ensure that we have minimum staffing at Grover Beach," Grover Beach Mayor John Shoals said.

The sole public commenter, Patrick Ferguson, echoed the call for City Council to consider the proposed transition. Ferguson is president of the International Association of Firefighters Local 4403. He said the growing community—business, residence, infrastructure, and now the cannabis industry—has a direct impact on the department's ability to provide a level of service to the area.