There's been a lot of squabbling among Grover Beach residents over the recent installation of buffered bike lanes on several blocks of Newport Avenue. Heeding public outrage, the city now plans to rip out the raised curbs that currently separate lanes for cyclists and vehicles, a project detour that is expected to cost roughly $20,000.

More than 30 San Luis Obispo County community members shared their thoughts on the matter at a Grover Beach City Council meeting on Oct. 21. 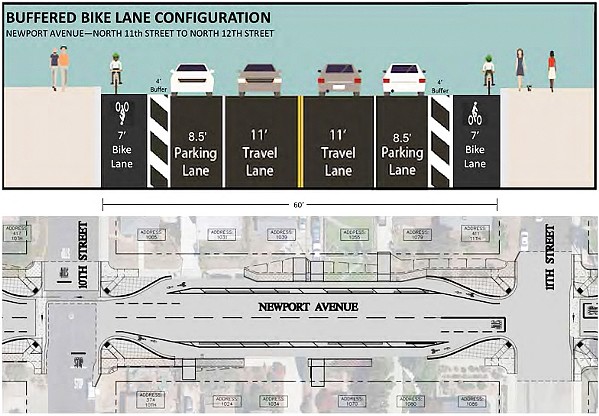 Although there were a number of cyclists and residents from other parts of the county who spoke in favor of the current bike lane design on Newport, nearly all of the Grover Beach residents in attendance were vehemently opposed.

Several attendees took issue with the street's new parking structure, which puts the bike lane directly next to the sidewalk, followed by the raised curb, followed by spots for street parking, then lanes for vehicle traffic. The buffers are intended to make cyclists and pedestrians feel sufficiently barred from vehicle traffic, but Newport resident Louise Porton said it's only made backing out of her driveway a struggle.

"Daily, every time we back out of our driveway, we risk getting in an accident as we try to see beyond cars parked 12 feet out in the road and turn sharply into the narrow roadway," Porton said at the meeting. "It's a terrible safety hazard."

Other attendees complained that the black berms on the street of the same color are a tripping hazard, especially for seniors, those with disabilities, and at night. An avid biker said the new lanes aren't particularly safe, especially because they end suddenly at each intersection and block motorist's views of bikers.

Resident Diane Shannon said at the meeting that she had a petition with more than 100 signatures opposing the project's current state.

"This is about safety," Shannon said at the meeting. "We care about our seniors, the skateboarders, the dog walkers, the mail carriers, the handicapped, the stroller family, the cyclists, and all the residents that live and travel on Newport Avenue. You're in denial if you don't realize there's an issue with this design."

"You need to remember: You work for us," she added.

Grover Beach is in its fifth year of a road rehabilitation project, which is funded by a bond measure approved by voters in 2014 and includes the repair of scores of Grover Beach city blocks, according to a city staff report. In several previous meetings, residents expressed interest in redesigning Newport Avenue to reduce traffic speeds, increase bike and pedestrian safety, and improve parking.

The current Newport design, which is about 40 percent of the way completed, was approved unanimously by Grover Beach City Council at a meeting on Jan. 22. But shortly after construction started, residents became concerned with various aspects of the project.

At the Oct. 21 meeting, City Council voted to remove the recently installed curbs and instead install bike lanes that are buffered with painted lines, green striping where appropriate, and parking adjacent to the curb.

Although Councilmember Mariam Shah, who also lives on Newport, voted in favor of the changes, she was hesitant.

"I just am worried about us redesigning something right now that's already been professionally designed, is halfway—not even halfway, partially halfway—done, and hasn't really been given a fair chance," she said at the meeting. "I just am not sure this is the right timing for that." Δ