Grover Beach residents with residential and commercial alarm systems that aren't registered with the city will start to face consequences in April.

The Grover Beach Police Department announced on Feb. 14 that its new alarm system registration website, where residents and businesses can apply for alarm permits and pay false alarm fines, is up and running. The website is part of a city effort aimed at reducing police time spent responding to false alarms—those pesky incidents when an alarm system is activated and officers respond only to find a door accidentally left open or an employee without the proper code. 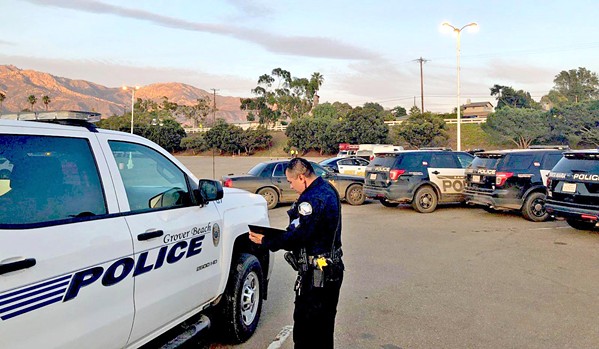 "We have a busy department with limited resources," Grover Beach Police Chief John Peters told New Times. "We don't have a lot of time to waste on false alarms."

Grover Beach Police respond to an average of 300 false alarms annually, Peters said, a response that requires two to four officers and at least 20 minutes per incident. About 97 percent of incidents involving an alarm system set-off are duds, according to Peters, and most police time on those calls is spent trying to locate a business owner or resident who can come lock up the facility.

Peters said he's personally stayed at the scene of a false alarm for more than an hour, waiting for a business owner to swing by and lock up, time that he could have spent handling real crime.

In September 2019, Grover Beach City Council passed an ordinance updating the city's past alarm systems regulations, which were last updated in 1983.

The ordinance requires alarm users to register their systems and obtain a $25 permit each year. The permits, according to a city staff report from 2019, provide police with a "complete picture" of the locations officers will be called to in the event of an alarm activation.

The recent Grover Beach Police Department notice regarding coming enforcement received some backlash on Facebook, where several commenters criticized the city for punishing its most cautious residents over the kind of mistake anyone could make.

Chief Peters said he understands that and admitted that even he's accidentally set off the alarm system at his own house. So the Police Department is offering an online "False Alarm Academy," similar to traffic school, where offenders can go through a quick course and get fees waived.

Those classes and other services are being provided by a third-party company, the PM AM Corporation, which the city hired to collaborate with alarm users and companies. Through PM AM, alarm companies are able to upload new customer information to a website as mandated by the ordinance, and it alerts alarm companies of customers with frequent false alarms.

A portion of the annual permit fees will go toward funding PM AM's actives.

There are about 40 other cities in California, including San Luis Obispo and Santa Maria, using similar false alarm reduction services, according to Peters, and he said programs like the one in Grover Beach have proven to reduce false alarm calls by nearly 45 percent within the first 12 to 18 months of implementation.

"And that there is our goal," he said. Δ