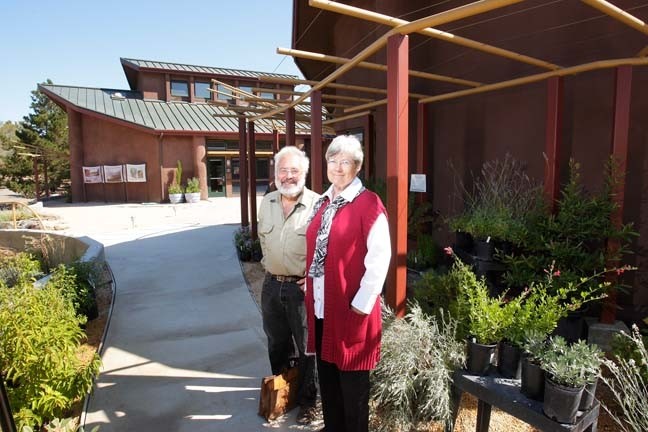 There is no denying that visitors to the San Luis Obispo Botanical Garden are treated to abundant Mediterranean eye candy. Apart from breathtaking visuals, however, the garden educates visitors about sustainability.

The garden has focused exclusively on displaying plants from the five Mediterranean climate zones since it was incorporated in 1991. These climate zones are located on the west coasts of all continents between 32 and 45 degrees latitude, and include Chile, South Africa, Australia, California, and the Mediterranean basin.

The climate at these locations is temperate with hot, dry summers and cool, wet winters. Plants in these areas can live up to seven years without water.

“Our focus has always been on conservation because even 20 years ago, when the garden was first thought up, the board knew that fresh water was going to be a coming crisis in the world,” said Development Director Liz Scott Graham. “It’s always been a focus for us to introduce people to the Mediterranean plant community so that they would be put into the nursery trade.”

An ambitious $60 million “master plan” for a new garden has been in the works for the last 10 years. The new garden will be constructed within the 3500 acres of county land that surround the current location. Graham notes that every cent put toward this massive project has been raised privately.

“It will be a major tourist attraction,” Graham said. “In fact, our plan is to market it with the beautiful Big Sur coast, the Monterey Bay Aquarium, and the Hearst Castle. Where else in the world do you have a 100-mile stretch of coast with three world-class, visitor-serving attractions?”

Since the original master plan for the upgraded garden is 10 years old, it is currently being amended to include new features, including a gondola to take visitors to different parts of the garden, zip lines, four cafes, and five restaurants specializing in food from the representative climate zones.

Once the amended plan is submitted, it will take about two and a half years for the proper permits to be obtained  before construction will commence. The garden will not be complete for another five to seven years, but it is expected to draw 1.5 million visitors annually.

The Botanical Garden has held countless events and fundraisers over the years to raise money and awareness. On Sunday, Sept. 27, the garden will host a festival to celebrate its 25th anniversary. Starting at 11 a.m., sliders, salads, beer, and wine will be available to attendants.  Live bands, including the Zongo Allstars, will be performing all day and there will be activities for children.

“This is a really big thing for us. We are instituting a new tradition where we are going to honor people who have made extraordinary, extraordinary contributions to the garden over the last 25 years,” Graham said.

Three notable contributors will be honored in a ceremony starting at 2:30 p.m. Tickets for the event are $5 for children, $25 for general admission, and $60 for premium tickets, which entitle guests to an Italian-themed Mediterranean dinner.

The grand opening of LaMirage Café is set for Labor Day weekend, Sept. 4 through 6. Located at 250 Avila Beach Drive in Avila Hot Springs, the café has a classic beach theme highlighted by a tiki bar that serves beer, wine, and wine margaritas. They offer specialty sandwiches, soups, salads, pizza, hotdogs, and burgers including their signature, the cioppino sandwich. The café serves breakfast, lunch, and dinner, any of which can be eaten there or taken out. It will be open from 8 a.m. to 9 p.m. Sunday, Monday, Tuesday, and Thursday and 8 a.m. to 10 p.m. Wednesday, Friday, and Saturday. Call 710-0885. …

The Land Conservancy of San Luis Obispo County has appointed executive officers to the Board of Trustees for the 2009-2010 term. The board aims to double the current pace of conservation in San Luis Obispo. Last January, the board pledged $251,000 to conservation programs. The 2009-2010 officers include incumbent President Gary Felsman from Arroyo Grande, Vice President Lisa Wise from Los Osos, Treasurer Alex Rothenberg from San Luis Obispo, and new Trustee Molly Preston from Shell Beach.