Growing up: 'Kaufman's Hill' chronicles the mysteries of boyhood

Suffering the guilt of killing a bird with a slingshot, examining a dead animal, traversing a dark tunnel without knowing where it leads, leaping before you look, being bullied, pulling pranks, and fending off peer pressure to do what you know is right—these are the trials and travails of boyhood, that mysterious period where every day feels like a test and you have to make a tough choice: Do you do the easy thing, the selfish thing, or the right thing? These early childhood choices can haunt you into adulthood, and in John C. Hampsey’s memoir of boyhood, Kaufman’s Hill, they do indeed haunt. 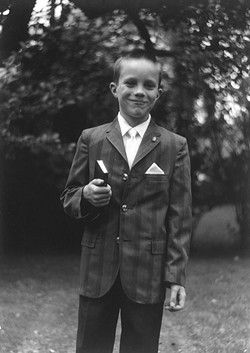 Hampsey has managed to capture these seminal moments in a series of beautifully crafted vignettes of his youth in Pittsburg that begin in 1961 when he’s 7 and conclude at age 14 in 1968—the precipice of the counter-culture revolution. It’s a moving portrait of a boy figuring out what kind of man he’ll be, dealing with challenging peers, an emotionally absent father, and a culture at a pivotal point in its history.

One of the first things you’ll notice about the book is the sparklingly clear and detailed recollection—right down to sounds and smells. Lord Byron famously said, “And, after all, what is a lie? ’Tis but the truth in masquerade.” How much of this detail is real?

“My siblings read the book and said, ‘I don’t remember details and dialogue from our childhood. How can you?’” Hampsey said. “It sounds kind of New Age, but I can remember images really clearly, and as I was writing the book, I would go back, almost like hypnosis, and unpack these images. I never felt like I was making something up, more like I was unfolding this memory. But it’s something I can only do once, because once you remember it this way, you remember the story not the memory. I say in the acknowledgements that everything is true as I remember it, and I never altered anything to make it more dramatic. As I was writing it, I thought of it more as an autobiographical novel, not a memoir.”

The narrator’s voice captures the immaturity of a young boy, but the voice also has to age seven years. What about that choice?

“That was actually a key issue,” he said. “I decided to use the voice of a boy in the moment rather than be looking back in my own voice and risk being sentimental and caught up in moral judgment. If you stay in the voice of the boy then it’s got power and a sense of being in the present. The struggle is, if you use the voice of a boy, you have to use the vocabulary of the boy, so you’re stuck with the lexicon of an 8, 9, or 10-year-old. I wanted to use the language of a boy but make the writing powerful, which is why it was slow going. I wrote the book over 20 years. In fact, I started writing it before [Frank McCourt’s] Angela’s Ashes came out, and he wrote from that perspective. Not that I’m comparing our books, but it when his came out, it gave me a great boost of confidence that I could do it and pull it off.”

As a child of the ’60s and ’70s, I could relate to Hampsey’s youth, the freedom to explore, to do colossally reckless things without my parents ever knowing, to feel real fear in a dangerous world, and to face hard choices. It’s a childhood that doesn’t feel as available today as it once did.

“I’ve done about eight readings so far, and people seem to have two reactions: ‘After reading your book, I remember my childhood differently,’ or ‘My childhood was a lot like yours.’ I didn’t realize the universality of my story. We all have individual lives, but they connect to universal myths, like Jungian individuation or Joseph Campbell’s mythology. What makes my story special? It’s all been done. But I was never worried about that when I was writing because it was never about my life. I wanted to burrow into that time right after the ’50s but before the cultural revolution—the threshold where woods were turning into suburban shopping malls, a time when kids would disappear in the morning and not come home until night and bad shit would happen and no one ever found out. You were just making your way through this dangerous, exciting world. You know, today most kids know nothing but play dates. They’ll never experience this.”

One thing that comes through is Hampsey’s childhood decency—his sense of guilt when he does something he shouldn’t, his resistance to being dragged into things he doesn’t morally agree with. You can’t help but like this kid; root for him to do the right thing or to connect with his emotionally distant father; empathize as he tries to understand why a group of black boys are throwing rocks at him or as he’s holding back the tears when he’s being picked on; nod in approval as he discovers that the brave Huck Finn-esque boy he looked up to is really an insecure masochist. Boyhood is a minefield, and Hampsey’s Kaufman’s Hill depicts one boy’s path through it.