That first celebrity pop star crush in the tween years is filled with nights spent staring dreamily at posters and listening to top hits on repeat while doodling their name in hearts on notebook pages. Oh, to be young. Children of the ’90s, think how much your younger self would have lost your mind if say Justin Timberlake or Nick Carter showed up in your hometown for a kiss goodbye before joining the army? 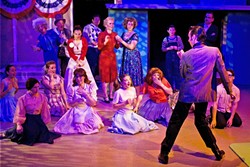 Now magnify that combo of teen angst and ecstasy by a million and you have the classical musical Bye, Bye Birdie, which is currently on stage and closing out the season at the San Luis Obispo Little Theatre. The show, directed by Cal Poly Professor Heidi L. Nees, is set in 1958 and revolves around pop star Conrad Birdie (Tony Costa, who also played Elvis Presley in Cuesta’s production of Refried Elvis last year) being drafted into the Army, which is based on the real life rock star Elvis serving in the armed forces.

Full of angst over losing his main client (that he owes money to), Conrad’s manager Albert (Cameron Parker) tries to find sympathy from his longtime secretary and girlfriend, Rosie (Veronica Surber). Instead she hands in her notice, fed up over waiting eight years for a raise and a ring. After Albert begs and whines for her to stay, Rosie does acquiesce, on the condition that after he gets enough money to pay off Conrad, he’ll leave the music biz for good, finish his master’s degree, become an English teacher like he always said he would, and marry Rosie. The two hatch a scheme to have one lucky fan get a last kiss and song from Conrad (to be broadcasted on TV, of course) right before he gets on the train to join the Army. And who should be randomly selected as the lucky recipient of said kiss, but Kim MacAfee (Cassidy Cagney), the 15-year-old president of Conrad’s fan club in Sweet Apple, Ohio. 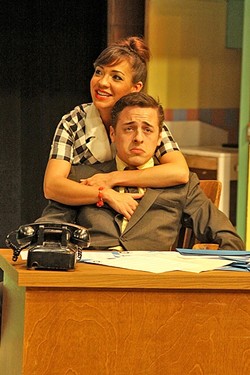 On the surface, it may seem that the plot centers on Kim and Conrad’s interactions, but really Albert and Rosie are the pair to watch, and Parker’s and Surber’s endearing portrayals definitely steal the show. At 33, Albert still has commitment issues and is a super mama’s boy, but Rosie holds on because she can see the potential in the man she loves, (Sound familiar, ladies?). Things get really interesting when Albert realizes he just might lose her.

Albert’s reticence to grow up, get a “respectable” job, and marry the woman he loves is harshly juxtaposed with Kim’s character, who is 15 and so ready to be all grown up as she croons “How lovely to be a woman and have one job to do; To pick out a boy and train him,” and basks in the happiness of going steady with Hugo (Elliot Peters).

It’s also worth noting that since the play is set in the 1950s (and debuted in 1960), Rosie is markedly the only character of color and things get kind of racist at times, with other characters assigning her cultural identities ranging from Mexican to Guatemalan (she’s from Pennsylvania), and Rosie herself plays into it, drunkenly declaring herself the “Spanish Rose.”

Signs of the time it was written aside, Bye, Bye Birdie is a laugh-inducing musical that will leave you humming and happier than when you first set foot in the theatre.

Ryah Cooley is swooning at rcooley@newtimesslo.com.