Mardi Gras brings out the child in all of us 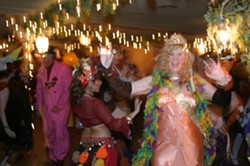 I’m wearing a faux leopard-skin jacket with black cuffs and lapels, with a matching Huggy Bear-style pimp hat, tons of Mardi Gras beads, and white ruffled cuffs and collar. I mention this because some jerk in a black BMW who’s driving like a maniac deserves to have his butt kicked, but I think if I approach him dressed as I am, he might die of laughter before I get a chance to teach him a richly deserved lesson.

Plus I’m on my way to ARTS Obispo’s Mardi Gras celebration fundraiser at Madonna Inn, and I’ve got a hot babe with me—artist Lara Oliva—who’d rather see my dancing skills than my street-fighting skills, both of which, honestly, need work.

When we arrive, Lara has a garter belt-related costume malfunction, but the nice lady in the Madonna Inn gift shop roots a safety pin out of a drawer. Hence, stocking in place, Lara and I make our way to the Venetian room feeling very much like Alices descending down the rabbit hole.

Whooeee! People go all out for Mardi Gras! I immediately start seeing new friends from last week’s Beleza Sol house party. There’s Francis, who raises his gal Kyle’s skirt to show me a glittery heart glued to her well-toned thigh.

“Ha! You’re wearing your heart on your leg,” I say.

“I was going to wear mine on my sleeve,” says Francis.

“No, this way’s better,” I say, enjoying the view.

By the way, last week I reported that Francis used to have long hair but that it had been cut. Wrong! He was wearing a wig.

“If he cut his hair he wouldn’t be sleeping at my house,” scolded Kyle.

Then I see Briana, last week’s catwoman, who’s dressed in a red corset so tight she has to take a tiny breath after almost every syllable. She reaches for my ruffled collar.

“It’s (wheeze) a fancy (wheeze) dickey!” she manages to get out before fainting in my arms like a swooning damsel in some trashy romantic novel. When she awakes, she says, “It’s fun (wheeze) to say (wheeze) dickey.”

Then she’s out again.

I lower her to the floor and go get Lara and myself some ridiculously expensive drinks, and when I return to the table, Francis and I start discussing what the little card marked with the letter “V” means. It’s attached to Lara’s auction packet.

Turns out it’s for vegetarian, which we discover as dinner is served.

Then rich people start bidding on cool auction items, one of which is a private house concert by Inga Swearingen, who gets up and sings a song right before the bidding starts, eventually bringing in a whopping $1,500 for ARTS Obispo.

Then Briana comes over and is excited because someone just complimented her.

“She said I looked fucking gorgeous,” gushes Briana, apparently able to breathe when being complimented. Then, as I write that in my notebook, she says, “You can’t publish that!” 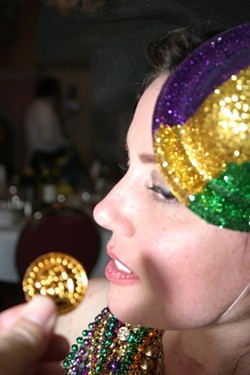 Finally, after some dancing, the evening is coming to a close and I see Heather Stevenson, who donated a week at her Mexican vacation home to the auction.

She has nothing but a glazed look in her eyes, but the next day she leaves this message on my Facebook page: “I hope someone was able to give you something quotable last night. I think the $16 cosmopolitans from the Madonna Inn bar dulled my powers of observation. In retrospect, I have the feeling like I’m still in high school in Cleveland and I went to a really great Halloween party in somebody’s basement rec room.”

Yeah, that sounds about right.