If you dare to move past the safe and comfortable haven of the popular big budget movies on Netflix you’ll find that part of the streaming service is the digital equivalent of digging through the bargain DVD bin at your local grocery store. You know the one’s I’m talking about: a massive, messy mountain of straight-to-video flicks with bad plots and unknown actors that usually don’t cost more than $10. 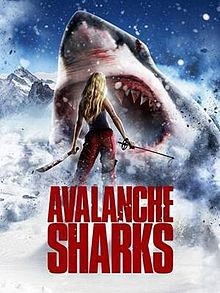 It’s exactly the kind of place you’d expect to find 2014’s Avalanche Sharks, a movie with a title that should really tell all you need to know about it.

Riding the wave of poorly CGI’d shark-themed movies with ludicrous plots pioneered by the Syfy Network’s tongue-in-cheek Sharknado, Avalanche Sharks hits all the same notes without any of the wink-and-a-nod self-awareness that Syfy smartly injected into its shark movies. The movie takes place on a scenic mountain ski resort packed with college students in the throes of a debaucherous spring break celebration. But an avalanche on the mountain awakes an ancient Native American curse in the form of two vengeful ghost sharks. Soon all those chiseled frat bros and buxom, bikini-clad coeds become a smorgasbord for the angry sprits, which swim through the snow to feast on their victims.

That’s a hell of a premise, but the ridiculousness of the film’s concept only gets you so far. The actual plot is pretty predictable, the characters are tropey and generic, and the acting is forgettable. It’s not a very good movie at all. But despite all those shortcomings, I genuinely had fun watching it.

It’s definitely not Jaws. It’s not even Sharknado, Sharktopus, Two-Headed Shark Attack, a or Zombie Shark (yes, those are all real titles). But Avalanche Sharks, for all its flaws, delivers on the very core of what these movies are about: sharks popping out of stuff and eating people. It’s 82 minutes of dumb fun. It eschews the smirking irony of faux-schlock hipster indie cinema. In other words, Avalanche Sharks isn’t a love letter to B-movies, but an actual B-movie.

For all its flaws, Avalanche Sharks makes no apologies for the kind of movie it is, and you have to respect that. We don’t always need or want overhyped, expensive blockbusters or artsy, nauseatingly cerebral film festival bait. Sometimes we want, and even need, something quick, dumb, and fun. The cinematic equivalent of a deep-fried Twinkie, so to speak. That’s what the current glut of badly animated sharks is all about, and I personally hope it stays that way. (82 min.)