The first time you discover a so-called “cult” movie is always a memorable experience. The best way to discover one of these films is through a friend, someone who knows you and your tastes, and there’s really nothing like that moment when they turn to you with an excited and mischievous twinkle in their eye and say the magic words: “You have to watch this.”

This is exactly how I discovered the low-budget, blood-soaked 1982 horror film Basket Case. Looking back, the memory of the discovery is nearly as enjoyable as the movie itself. While it’s not much to look at, and the plot, acting, and directing are comically bad throughout most of the movie, Basket Case has gained a following among fans of tawdry horror schlock that’s extended its life long past what any reasonable film fan would assume.

The film follows Duane Bradley (Kevin Van Hentenryck), a young man who arrives in the dirty, gritty, pre-Rudy Giuliani New York carrying a large and mysterious wicker basket. That basket houses Duane’s deformed, cannibalistic brother, Belial. Through the course of the movie, we learn that the brothers were conjoined twins, separated against their will at birth. Duane has come to New York to let his monstrous brother take revenge on the doctors who performed the surgery. Of course, there are many casualties along the way. 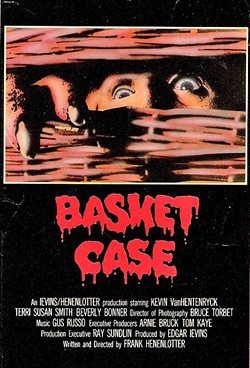 The most memorable part of the movie is, of course, the monster. Belial is a skin-toned rubber creature so poorly made that you can’t help but love him right off the bat. Between janky puppeteering and old-school stop-motion animation that brings life to Belial’s rampages, the scenes of this sad, deformed thing venting its rage and bloodlust are disturbing and hilarious at the same time.

The setting of the movie is also worth noting. It takes place in a squalid, dangerous, neon, and sex-soaked New York that anyone like myself (born after 1980) has probably never seen before. The set-up shots of this lost city are far from the sanitized, Disney-fied New York we see today. Instead, the run-down hotels, offices, and trash-strewn streets are the perfect setting for the weird and violent world of Basket Case.

Despite bad acting, poor video quality, and a nearly laughable rubber monster, Basket Case is still one hell of a horror movie and well worth watching. Most truly great horror is based in very real fears, and that is definitely true for Basket Case. Duane is your typical young man arriving in a new city to become his own person and make his own way, but no matter what he does, his brother serves as a constant reminder that you can’t escape your past. Try as you might to leave it behind, that old past will occasionally and unexpectedly rear its ugly head and threaten to break the façade of the new identity you attempted to forge when you left your family to strike off on your own.

Basket Case is about the fear that lies behind the fear, a social unease and dread that resonates and unsettles us no matter how rubbery and fake the monster on the screen looks. That psychodrama is a whole lot more fun to watch when its played out though a red-eyed monster and buckets of fake blood. (91 min.)