Guilty Pleasures: Bird on a Wire

It’s nearly Valentine’s Day and that means that, in addition to a sudden spike in sales of chocolate and gift cards, the movie theaters will be packed with lovebirds looking to take in a romantic movie or two.

But romantic movies, and romantic comedies in particular, aren’t everyone’s cup of tea, and filmmakers have long looked for ways to rope in moviegoers who would otherwise skip standard genre rom-coms like Love Actually, Knotting Hill, or Pretty Woman. Every now and then, some Hollywood studio tries to do this by injecting elements of a movie genre that’s pretty much the polar opposite of romantic comedy: action.

That’s exactly what you get with 1990’s Bird on a Wire. It’s the cinematic equivalent of trying to get a picky child to eat their veggies by sneaking them in to a bowl of mac ‘n’ cheese. The film stars Mel Gibson as Rick Jarmin, a man hiding in witness protection after helping put a crooked, drug-dealing FBI agent (David Carradine) behind bars. Fifteen years later, Gibson’s character is working at a Detroit auto-shop when he’s accidently discovered and outed by Marianne Graves (Goldie Hawn), a New York attorney and former lover. The two meet, coincidentally, just as Carradine’s character is getting out of prison and looking for revenge, so it’s not long at all after the two romantic leads’ meeting that the bullets start flying. 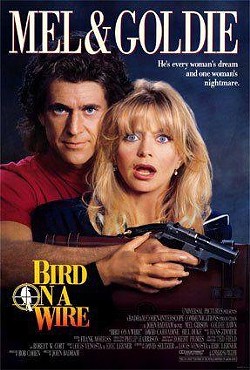 The movie action is a vestige of the 1980s, complete with firefights and chase sequences that border on slapstick, and an outlandish finale set in a zoo, where Gibson and Hawn take on the bad guys among a host of dangerous jungle animals. And while action is pretty much non-stop, the romantic relationship remains the focus of film, and rests completely on the chemistry between Hawn and Gibson. Bird on a Wire is Mel Gibson at his Mel Gibson-iest: A feathered-haired wisecracker who can handle a gun when he needs to. It’s the Mel Gibson we all remember from Lethal Weapon, before his sexist, anti-Semitic ranting permanently and rightly crippled his image. Hawn, a damn good actress in her own right, is relegated to the “ditzy blonde love interest” role in the film, but she plays the character type to a T, and the two have a pretty watchable rapport in the midst of gun fights and wild car chases.

You’d be hard-pressed to find many films like Bird on a Wire now. While most action movies now include some kind of romance element, it’s usually relegated to a secondary storyline. Think of pretty much any Michael Bay explosion-fest, and you will usually find a B-story about the hero falling in love with a flavor-of-the-week model/actress cast as his love interest. But there was a time, a very brief time, where Hollywood tried to flip that formula on its head, pushing the love story to the forefront, and relegating gunfire and explosions to the background. Bird on a Wire wasn’t the first; it followed in the footsteps of 1984’s swashbuckling Romancing the Stone, which was a smash hit that few other films were able to replicate. Even though romance-first action films are mostly a thing of the past, their DNA lives on in more recent offerings that more freely play with the dynamic like Fool’s Gold, Mr. and Mrs. Smith, and Knight and Day. Will they ever find that magic sweet spot that will attract cine-philes who want light-hearted romance and balls-to-the-wall action coming back into theaters? Only time will tell. (110 minutes)