It's a rare thing—watching Gandhi fight crime with George Washington Carver while the two battle the latter's talking anthropomorphic peanut (that's armed with a machine gun and diabolical monocle, by the way). But this is Clone High and so the extraordinary and outlandish are routine. I mean, the show is about a bunch of famous historical figures that the U.S. government dug up, extracted their DNA (a la Jurassic Park), and made into modern day, awkward high school teen clones. 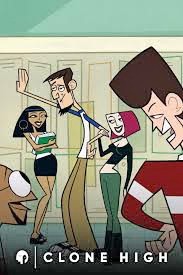 So again, while some shows may dabble in the absurd, Clone High is swimming in it. The scene referenced above is from the show's fourth episode, "Film Fest: Tears of a Clone." It's your typical high school film festival, except for the action movie produced, directed, and starring Gandhi and Carver, oh and Abe Lincoln's sports drama about a giraffe playing football. I guess I shouldn't forget about Joan of Arc's black and white avante garde film that reveals her secret love for Abe (spoiler alert: only the clone of Sigmund Freud understood it). I also probably should mention Cleopatra's—yes, that Cleopatra—epic about how hard it is to be perfect and pretty. I have a lot of thoughts about Clone High, the cartoon series backed by MTV for just one season before it was taken off air despite critical acclaim. The show never quite captured audiences' hearts and souls the same way it did with professional TV viewers, and a few characters, such as Gandhi, were greeted controversially. Or in his case, with hunger strikes stemming from outrage by the show's depiction of the Indian activist as a hard-partying teenaged horndog. Even though we were only graced with 13 episodes (11 of which actually made it on air) before it was canceled, Phil Lord and Christopher Miller's (21 Jump Street, The Lego Movie) Clone High is probably one of the last great '90s-style high school TV shows and succeeds because it unabashedly parodies every single one of them. Each episode begins with Will Forte (MacGruber, The Last Man on Earth) informing the audience that tonight's iteration would be a "very special one." This formula of the angsty cloned teens dealing with a specific social issue such as how to accept a classmate with ADD (Gandhi), dealing with the death of friend (a very graphic one by Ponce de Leon), or whether or not to smoke raisins (featuring special guest Jack Black), seems to pull and prod from the after school special style genre such as Canada's Degrassi.

Week after week, the clones are faced with a problem and try to solve it. Sometimes, the show starts with a riot after a football game and then ends with the students learning a lesson and rioting in celebration.

Lord and Miller binged watched episodes of Dawson's Creek before beginning work on the series, and Clone High at times plays out as a mirror parody. For instance, the high school the clones attend host a prom seemingly every week. Meanwhile, one of the core story arcs follows the love triangle of Abe, Cleo, and popular jock and class president, JFK. There's a whole cache of easily digestible humor for the viewer to consume. Such as the main hangout where JFK, his buddies, and the rest of the clones frequent is called "The Grassy Knoll" which features images of both Kennedy's and Lincoln's assassinations.

I also am very easily won over by cheesy history jokes, like when Abe says he doesn't like the Napoleon clone because he has "some kind of complex." There's another part where Gandhi tells Catherine the Great to, "get off her high horse."

It's not for everyone, again, India was pretty miffed over the depiction of Gandhi. But for those of you with an itch for a flashback to the early 2000s and '90s sitcoms and dramas, you can't really go wrong with Lord and Miller's hilarious stand-alone season of Clone High. (13, 22-minute episodes). Δ