The crash of the housing market, tornadoes sweeping through the Southern states, and Fidel Castro stepping down as president of Cuba all sum up 2008. It was also the year in which film tested the boundaries of unknown monsters attacking certain parts of the United States.

Cloverfield (2008) is a modern take on a Godzilla-like monster terrorizing New York City. Although the audience only sees glimpses of the monster’s limbs creeping around skyscrapers, it's left unknown what it actually is and where it came from.

The film definitely falls under the science fiction category with a hint of terror, so the PG-13 movie is definitely not for the faint-hearted. Just a disclaimer, this movie ends on a cliffhanger, which I completely enjoy, so if you’re a “loose ends should be tied up in the final minutes” kind of moviegoer, then this isn’t your film. 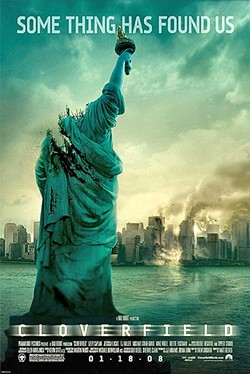 The movie focuses on a group of friends who have gotten together to celebrate their friend Rob’s (Michael Stahl-David) job promotion in a fabulous New York City loft apartment. With an entire cast of unknown actors, it sets the mood of just another night of 20-year-olds getting together to enjoy a beer, cheesy 2000s pop music, and relish in their early career accomplishments.

Everything takes an obvious turn for the worst when it seems like an earthquake rocks the city. As soon as everyone steps out of the apartment, they witness the head of the Statue of Liberty being tossed into the street like a bowling ball.

The group soon finds out that an unknown creature is destroying the city. The destruction causes chaos—the obligatory looting and overall confusion. Is it a monster, reptile, or alien? Who knows. As the creature makes its TV appearance on the news and wraps itself around buildings, smaller monsters make their way down its body and attack innocent bystanders. The film follows the group in its attempts to escape the creature as well as rescue Rob’s love interest, a fool’s mission.

While I can’t say that the film is terrifying in any way, there are many disturbing scenes where the creature bites people or body parts are torn in half.

The difference between this movie and other movies released in 2008 about monsters and mysterious substances terrorizing cities (like The Happening) is that Cloverfield was presented in a documentary style. The entire movie is displayed through the lens of a hand-held digital camera, which created a nightmarish home-video tone to the story. While that feature sucks you into the madness along with the characters, it also makes the scenes hard to follow. The camera is clumsily moving around as the character Hud (T.J. Miller) is running around the city with his friends filming everything they’re seeing.

Overall, the plot isn’t what’s important in this film, it’s the fact that a giant freak of nature is going around and kicking down buildings while annihilating the human race, or at least the humans of New York. But the real question of this movie isn’t who the creature is, but how did the battery last long enough to document that night? (90min.)