It didn’t take long after the reality of Donald Trump’s election to the nation’s highest office set in that calls for California to break away from the Union started.

It was almost immediate. Even today, a group dead set on separating the “left coast” from the rest of the country are fully behind “Calexit,” going as far as trying to get a secession measure on the ballot by 2018.

To call the move a long shot is generous at best, but the election of a reality TV star as president, the possibility of mass deportations, Muslim immigrant registries, and massive border walls are blotting out the chillaxed rays of California sunshine and breaking the wall between reality and dystopian science fiction, so can you really blame them? 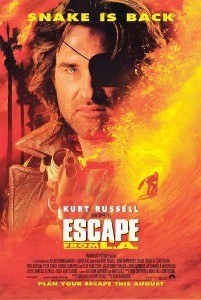 The 1996 science fiction/action flick Escape from L.A. takes a stab at what a “Calexit” might look like, albeit an involuntary one. The film is a sequel to famed director John Carpenter’s more successful (and much better) 1981 film Escape from New York.

The movie takes places in a dystopian America, where a massive earthquake caused part of our great Golden State to literally split off from the rest of the country, creating an island that extends “from Malibu to Anaheim.” This is convenient for America’s “president for life” (played by Cliff Robertson), an ultra-conservative Christian fundamentalist who has passed a number of restrictive moral laws, including banning tobacco, booze, recreational drugs, red meat, firearms, profanity, atheism, freedom of religion, and extra-marital sex. People who violate those laws are stripped of their citizenship and shipped off to the Los Angeles Island, a lawless hellhole now ruled by murderous gangs.

The movie’s overarching plot is very similar to its predecessor, with the iconic badass anti-hero hero Snake Plisskin (Kurt Russell) dropped into the fray on the island to retrieve the president’s daughter. In this case, she’s stolen a powerful satellite doomsday weapon and run off with Cuervo Jones, a wannabe Che Guevara-style revolutionary who plans to use it to hold the rest of the nation hostage.

Let’s be clear, Escape from L.A. isn’t a good movie. While it’s got enough gun play, fights, explosions, and general action to keep you watching, the plot is filled with heavy-handed and unbearable social commentary that tries to be both darkly comical and seriously somber. As you watch Snake listen to the plight of the poor immigrants deported to the island in one scene, then see him taking on a murderous plastic surgeon and gang boss (played by Bruce Campbell) or surfing down Sunset Boulevard on a tidal wave, the cognitive dissonance makes it hard to sit back and take the film in, leaving you spending most of the movie wishing you were watching the gritty 1981 original.

But the clumsy, nail-on-the-head political themes of the film, which constantly crosses the line into goofy over-the-top territory, still has some resonance, especially after the surreal 2016 election campaign and its outcome. We might once look at a character like the president in Escape from L.A. as cartoonish in his views and policies, but they now seem far closer to real life than is comfortable. What was escapism now appears more like eerie prophecy. With that line blurred, is it any wonder so many Californians might now escape into a secessionist fantasy, which is only slightly less silly than the plot of a middling sequel like Escape from L.A.?

Sure, more cerebral dystopian films like Dark City, Akria, and Blade Runner offer startling visions of what could be, but really, what’s scarier than being forced to live through a cheesy box office sci-fi flop? (101 min.)