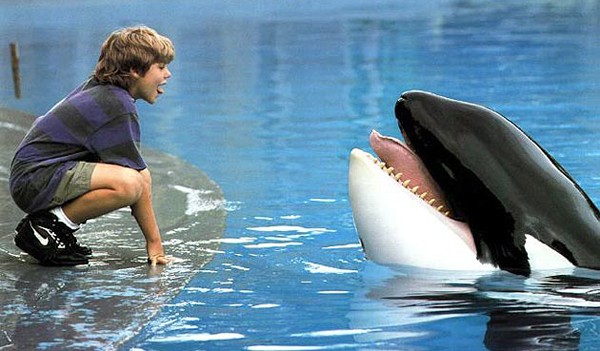 Now that the forced family fun of the holiday season is over, it's time to sit on the couch and decompress. Let the inevitable scroll through Netflix commence. I landed on Free Willy, you know, amusement parks, whales, angsty teenagers—it totally seemed like a light-hearted movie to zone out to.

Filmed in the early 1990s, Free Willy takes place in Seattle and follows the story of a 12-year-old foster child named Jesse, played by Jason James Richter (The Never Ending Story III, Last Rampage), who gets busted for vandalizing and stealing food from a local marine amusement park. Jesse's social worker is able to have him placed in a foster home only if he agrees to clean up his act by literally cleaning up his graffiti. While working to clean up both the park and his act, Jesse comes across Willy the whale (played by Keiko, an orca discovered at an amusement park in Mexico). Willy was recently captured by local whalers and brought in to try and boost park attendance and revenue. But Willy wasn't having any of it, being very uncooperative with the staff and trainer Rae Lindley, played by Lori Petty (A League of Their Own). But Jesse and Willy form a close bond when Jesse falls into the tank and Willy saves him from drowning, starting a friendship with both the whale and the whale's keeper Randolph Johnson (August Schellenberg, Eight Below), a local Haida native who teaches Jesse they ways of his tribe.

Soon Jesse is able to teach Willy tricks. The park owner Dial, played by Michael Ironside (Turbo Kid), sees this unlikely pair together and then sees dollar signs. He comes up with a plan to have the duo host "The Willy Show," where the orca will be on full display and do various tricks. Willy obviously starts to freak out and bang against his tank trying to escape, damaging it and not listening to Jesse. Can you blame him? Being in a tank surrounded by tons of children just banging on the glass sounds like one of my worst nightmares. Jesse thinks this is all his fault and plans to run away from home again, but before leaving, he needs to say good-bye to Willy. That is when Jesse notices Dail's assistant and other men going down to the observation portion of the tank and damaging it further.

Jesse decides it's time to bail Willy out. With Dail and his posse hot on their trail, they manage to get Willy back into the water, but Dail and his whaler buddies are waiting. Jesse sees this and starts running for the seawall but the seawall is blocking Willy from being able to escape. This is when I lost it.

I know it's not one of the best movies in the world, but damn, Free Willy really knows how to tug at your heart strings. So, if you're looking for a nice way to decompress and have some time to yourself, I highly recommend it (112 min.) Δ