I have to confess that this show is one of the main reasons I opted to fulfill my daughters' biggest wish to get Disney Plus as a Christmas gift. 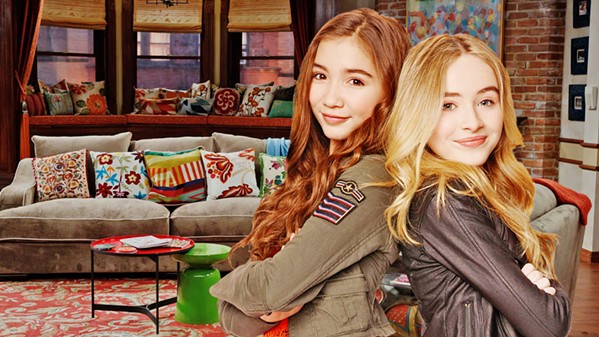 My girls—ages 10 and 13—and I got hooked on Girl Meets World while Netflix ran it, between 2015 and early 2019. Then Disney put the show, which had been canceled in 2017, on its own streaming service. I'd never seen Boy Meets World when it aired in the late '90s, so I came to this spinoff with fresh eyes. It takes place in Manhattan where the main characters of the original show, Cory Matthews (Ben Savage) and Topanga Lawrence (Danielle Fishel), are now married and in the midst of their careers and raising their two children, 12-year-old daughter Riley (Rowan Blanchard) and 5-year-old son Auggie (August Maturo).

Girl Meets World strikes a balance between delightfully sweet and thoughtfully poignant. It's a Disney show, so it's got that energetic, slightly plastic aura of smily intentionality and morality—Cory is a teacher as well as a parent to Riley, so there's a lesson in each show. But the lessons take on issues that actually resonate with me as a parent and with my girls as tweens: divorce, friendships, money, careers, loyalty, integrity, abandonment, remarriage. We see characters cry and look deep inside themselves as they rally around each other in some truly difficult situations.

Riley is at first glance all sweetness and bubbly optimism, while her best friend, Maya Hart (Sabrina Carpenter), is darker and more damaged from her dad's walking out on the family when she was young. The two friends balance out each other, illustrating one of the show's main themes: The secret of life is that people change people.

In one of my favorite episodes, the two best friends travel back in time to Cory and Topanga's past to figure out whether Riley can ever live up to her amazing parents (of course she learns that she's her own person and is also a combination of her parents' attributes). The girls are transported into a scene from Boy Meets World, the episode where Cory and Topanga hang out at Cory's house on a non-date. It's adorable, and since I hadn't seen the original show, it was a treat to see the middle-school-aged versions of Riley's parents.

I've since watched several episodes of Boy Meets World, also on Disney Plus, and I now understand why the studio audience cheered when certain characters showed up in Girl Meets World—characters including Cory's best friend, Shawn Hunter (Rider Strong), who appears often; Cory's brother Eric (Will Friedle); former teacher Mr. Feeny (William Daniels); and Stuart Minkus (Lee Norris)—fun fact: Minkus' son, Farkle (Corey Fogelmanis), is one of Riley's best friends. Even Cory's parents make an appearance or two. All the teenybopper fans—and this new, not-so-teenaged fan—of the original show will get the thrill of seeing many familiar faces all grown up and as quirky as ever.

Girl Meets World is a delight, and I recommend it to anyone with tweens (especially daughters) and any fans of the original show who might still be curious about their favorite characters. (72 episodes, 24 min. each) Δ