There is a reason we use the term “movie industry” to describe the world of filmmaking.

It is by all accounts industrial; with movies cranked out at a regular, predictable pace each year both in the United States and across the globe. At its worst, this creates a scenario where generic films clog theaters, and even most good films hew closely to well establish genres.

But there was a time when the art of filmmaking was still new, and filmmakers were exploring and playing with the conventions of a brand new medium.

It is in this space where we find Benjamin Christensen’s Häxan: Witchcraft Through the Ages, a Swedish-Danish film from the silent movie era. Billed as one of the most expensive silent films made in Europe at the time, the film is a mishmash of documentary, social awareness campaign, historical drama, and horror genres that you’d be hard pressed to find in any film today.

Häxan is divided up into multiple chapters, each documenting the origins of witchcraft in Europe from its early history up until the “modern era” when the film was released. While parts of the film are dry, scholarly summaries of history, where Häxan really shines is in its extended fictional re-enactments. Those re-enactments include elaborate stagings of the practices and rituals of witches that Christensen actually pulled from historical texts, particularly the Malleus Maleficarum, a 15th century text used by witch hunters during bloody purges of suspected witches at the time. 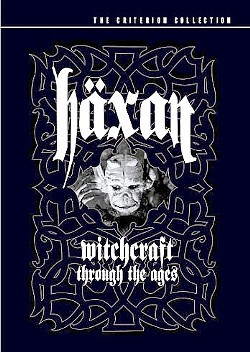 Despite their age, the scenes based on the descriptions in the Maleficarum are chilling and dark, even by today’s standards, and contain images, themes, and techquniques that we still find in modern day horror movies. From the depiction of black rituals between the witches and the devil, played by Christensen himself, to the scenes of a church inquisitor using torture devices to extract confessions from the “witches,” horror fans will easily recognize strands of Häxan’s DNA in everything from The Exorcist to Saw. Like many great horror movies, Häxan’s scenes of satanic rituals, torture, and nudity earned it a reputation. The film was banned in the U.S. and heavily censored elsewhere.

But the film is far more than simply a proto-horror flick. Christensen made the film to educate his then-modern audience on how superstition and mental illness often played a role in reports of witchcraft in the Middle Ages. The film often interrupts the narrative to comment on the treatment of elderly women and how those suffering from physical and mental disabilities were often singled out, accused of witchcraft, and eventually either banished or killed. Even more interesting: In the final section of the film, Christensen challenged the audience to question how women suffering from mental illness (then referred to as hysteria) were treated, noting that the old or mentally ill were often locked away from society in asylums or “treatment” clinics where questionable cures, like being forced to shower in cold water, were used. It’s this final section that will likely remind viewers more of a Michael Moore documentary than a horror movie.

“We no longer burn our old and poor. But do they not often suffer bitterly?” one of the film’s final title cards reads. “And the little woman, whom we call hysterical, alone and unhappy, isn’t she still a riddle for us?”

Whether you’re a diehard horror fan looking to dive into the genre’s past or a film history nerd looking for something strange and new, Häxan is many things at once, but mostly it is a window back to a time when the infant film industry was less of an industry, leaving the creative field wide open for imaginative artists to explore new ideas and ways of storytelling. (101 min.)