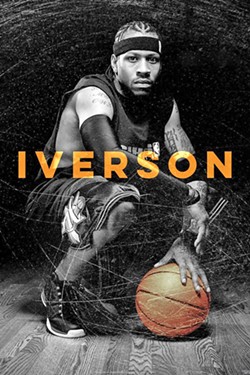 When friends and family get together for a good ol' "Netflix and chill," the "sports documentary" genre doesn't usually rise to the top of most people's interest list. Believe me, I've asked.

I love a good sports doc. I'm actually more of a sports nerd than those around me may realize. I try to act like a normal adult and just occasionally boast about the latest Golden State Warriors victory. But when no one's watching, I'll happily spend two hours on YouTube scouring old Kobe Bryant highlights from 2001.

In that basketball vein, I recently came across Iverson, a biographical documentary on Allen Iverson, the diminutive yet explosive Philadelphia 76ers legend who played from 1996 to 2009. In addition to being one of the best and most pleasing-to-watch basketball players ever, Iverson made an enormous impact on the game both on and off the court; he was the first to unabashedly bring African-American street culture into the limelight of the NBA.

Iverson grew up in racially divided Hampton, Virginia, with his father going in and out of prison. While he struggled in school, Iverson showed his athletic prowess from a young age. He emerged as Virginia's best high school basketball and football player. But shortly before the end of a storybook high school career, Iverson was falsely convicted of maiming by mob in a 1993 bowling alley altercation between white and black groups. At age 18, he was sentenced to 15 years in prison. Even though video evidence showed Iverson leaving the scene of the bowling alley before the fight erupted, Iverson, a well-known black athlete with a bright future, was put behind bars. It was extremely angering to see the racism and injustice play out. Thankfully, the governor of Virginia pardoned him after only four months.

He went on to play at Georgetown University and then became the first pick in the 1996 NBA draft. Iverson spent 10 seasons dazzling the NBA with his talent, collecting countless accolades and making an everlasting imprint on American culture. He was controversial for proudly donning tattoos, hip-hop attire, and a stubborn attitude, which inspired a whole generation of players to express themselves without reservation even as the NBA tried to crack down and institute a dress code.

As a player, Iverson was more than just the quickest guy on the court who could break your ankles with a crossover. He was art in action. He played with extreme grace—not unlike Stephen Curry today—but with more edge. And he always left his heart on the floor, as they say.

The documentary captures Iverson the human extremely well, interviewing his early adult mentors like a football coach and a school administrator, who provide moving insight on Iverson's infectious positivity that touched his friends and family amid a tremendously difficult upbringing.