When I sat down to watch 2015’s Kung Fury for this review, it was my fourth time viewing what IMBD describes as a “Swedish English language action comedy.” I came away thinking the same thing I did after the three previous viewings.

“What the hell did I just watch?”

Clocking in at a little more than 30 minutes, Kung Fury is an over-the-top send-up of just about every 1980s action movie trope you can think of and some you probably haven’t. The story centers on the titular main character, a super cop named Kung Fury (played by writer and director David Sandberg) who is granted near-supernatural Kung Fu fighting abilities after he was “struck by lightning while being bitten by a cobra.” With his Kung Fu powers, he fights crime in a neon-soaked, “futuristic” setting of Miami in 1985. The plot is just as bizarre as Kung Fury’s origin story and revolves around the main villain, a time-traveling Adolph Hitler (Jorma Taccone), who travels to the future to steal Kung Fury’s powers. 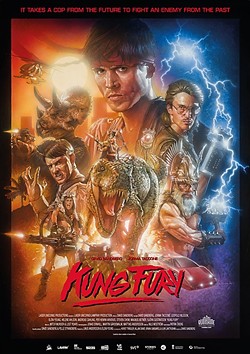 Are you still with me?

It’s clear that Sandberg has a love of VHS-era straight-to-video 1980s action schlock. He makes no qualms about cramming just about every trope he could think of into his short film. Kung Fury includes sentient arcade machines, raptors that shoot lasers from their eyes, a hacker named, uh, Hacker Man, buxom chaingun-toating Vikings, and my personal favorite, Triceracop: Kung Fury’s by-the-book partner who happens to be a Triceratops (obviously). Each scene is a dense snarl of nods and references to The Terminator, Miami Vice, Cobra, Masters of the Universe, Knight Rider, and more.

To be clear, Kung Fury is all the best parts of a bad movie, which is why it’s so damn fun to watch. Unlike other so-bad-they’re-good movies like The Room, the cheese and silliness of Kung Fury is clearly a labor of loving appreciation for the B-tier midnight action movies it apes. The devil is always in the details, and Sandberg has thought of them all, including a fantastic John Carpenter-esqe soundtrack and adding in visual effects that mimic the tracking lines that anyone of a certain age who’s tried to record a television show onto a VHS cassette will remember fondly.

In addition to being a wildly fun love letter to ’80s action flicks, the story of how Kung Fury came to be serves an inspiring lesson to any DYI wannabe filmmakers. Sandberg quit his job as a commercial and music video director to write the script, then spent $5,000 to film a short trailer with his friends. That trailer was used as the basis for an online crowdfunding campaign. The trailer was a hit and ended with more than 17,000 backers donating $630,000 for the final film, which premiered in 2015 at the Cannes Film Festival. Yes, you heard me right, Cannes.

If anything, Kung Fury is a stellar example of where true passion for art can take you, even if that art involves time-travel, dinosaurs, lasers, and Kung Fu.